If you spot a bat in your house, there’s no reason to panic. Bats try to avoid humans and other animals, so chances are that your winged visitor will eagerly exit as soon as he or she has a chance. Stay calm, keep kids and animals away, and try to stay near a wall: The bat will probably try to find an opening by taking a U-shaped flight path that is higher near the walls and lower toward the middle of the room. 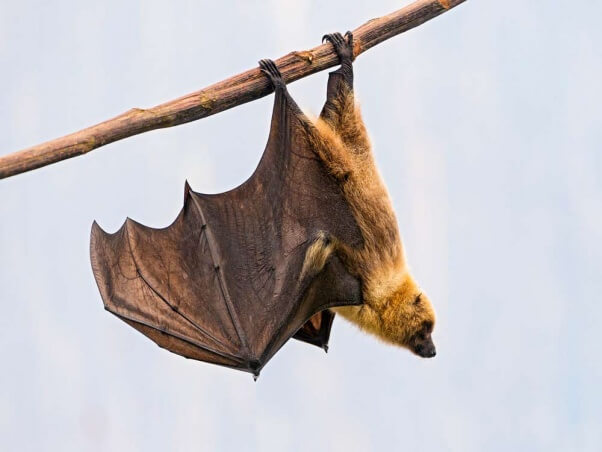 After closing interior doors, create an escape route by opening a window or a door to the outside. If the bat disappears before exiting, he or she may have landed on hanging clothes, behind curtains or upholstered furniture, or in a plant—any location where hanging is possible. Try to catch the bat in a net, or cover him or her with a wide-mouthed jar or plastic tub and gently work a piece of cardboard between the container and the surface from which the bat is hanging.

You can also capture a bat on the floor using a towel. Wearing thick gloves—never use your bare hands—gently place a towel over the bat, and gather the towel up very gently, being careful not to injure or suffocate the extremely fragile animal. With the bat wrapped inside, take the towel outdoors, and open it in a place where the bat will be safe even if he or she doesn’t fly away immediately.

If you believe that bats may have made a colony in your home, go outside at dusk and watch to see if bats leave through holes high on your house—where dormers meet roofs, around chimneys, or in loose siding. You may notice stains around the hole(s) from the body oils that bats leave behind when they enter and exit. Watch potential openings until at least 30 minutes after sundown. It takes only a second or two for a bat to exit and take flight.

It’s easy to keep bats out without harming them. Because bats often raise their young in these spaces, do not block their entrance until you’re certain that all the bats have left for their winter hibernation cave (usually in early autumn). You can then create humane exclusions by placing one-way valves or polypropylene bird netting over all the entrance points. The netting should extend at least 2 feet below the hole; seal the top and sides of the netting with silicone caulk, leaving the bottom open so that the bats can escape. This simple excluder will let the bats emerge but keep them from returning. Once you’ve confirmed that all the bats are gone, you can make repairs to ensure that the exclusion is permanent.