The dairy industry is in despair. Plant-based milks are giving it a run for its money, dairy factories are closing and reopening as nut-based milk companies, and major ice cream companies like Ben & Jerry’s and Breyers are rolling out vegan flavors galore. But what about butter and margarine? Now there are more vegan butter brands “spreading the love” than ever before, so it’s easy to help protect cows from abuse. But don’t just take our word for it—check out some of these products for yourself!

Milkadamia’s macadamia nut butter is easy to spread, making it a great choice for toast or warm banana bread.

This European-style spreadable butter is made with cultured almond milk, so it has a great tangy flavor.

Melt’s vegan butter comes in salted or unsalted sticks and in tubs, and there’s even a version that’s packed with probiotics.

Brown some of this spread with fresh sage for a quick sauce and toss in some Trader Joe’s cauliflower gnocchi for a complete meal.

Available in salted or unsalted sticks, Violife’s Plant Butter is versatile, delicious, and kind to cows.

As if you needed any more proof that the vegan revolution is here, Country Crock has launched its own dairy-free and vegan “plant butter.” It comes in two forms—sticks and spread—and it’s available in olive, almond, or avocado oil varieties.

I Can’t Believe It’s Not Butter

With all the demand for vegan products, it’s no surprise that I Can’t Believe It’s Not Butter has released a new “It’s Vegan” spread. The new buttery spread is made with a blend of plant-based oils, purified water, and salt and contains no partially hydrogenated oils. 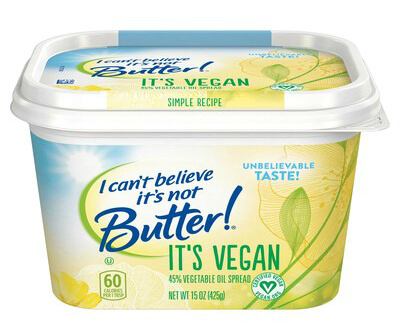 Earth Balance’s Organic Coconut Spread is perfect for serving on your morning toast.

Whether you’re making a piecrust or perfecting a slice of toast, this European Style Cultured VeganButter is a great choice.

Organic Buttery Coconut Oil? Yes, please! Nutiva’s “butter” is made from certified organic, non-GMO plants, including sunflower, coconut, and mint. Try it melted over popcorn for a divine snack.

The vegan Salted Whipped Butter is a product worth writing home about. Find a store near you.

Check out this simple way to make your own vegan buttery spread from aquafaba (canned bean juice):

Use a REFINED (ODORLESS) coconut oil and and for optimum flavor: Cold pressed rapessed/canola or FLAX OIL – or else just use your favorite flavored oil as 'vegetable oil'. In no time you'll have a salty, tangy European/Scandinavian cultured style butter that melts on your tongue.There's no soy, no, nuts, no palm oil and not even trace amounts of jack fruit! My recipe was featured in Washington Post last year and I finally finnished this walk through of the recipe – enjoy!Detailed English recipe and FAQ: http://plantepusherne.dk/vegan-aquafaba-butter/Dansk opskrift: http://plantepusherne.dk/magisk-vegansk-smoer-aquafaba/

Posted by PlantePusherne on Sunday, September 11, 2016

Have you been thinking about going vegan for the animals, your health, and the environment? There’s never been a better time to make the switch! Order our free vegan starter kit to help you make the transition:


I Want a Vegan Starter Kit!