Looking to eat something healthier (and kinder) than a beef burger? This giant beet burger should do the trick. In fact, you may never be hungry again after eating one of these.

The clincher is that it’s super-simple to make. With just a few fresh ingredients such as black beans, beets, and oats, you’ll be well on your way to enjoying an explosion of flavor in no time.

Don’t want blood on your hands every time you eat? This vegan burger comes with none of the cruelty to cows or environmental destruction that comes with eating meat. This is a secret-weapon recipe that belongs in every vegan cook’s kitchen. 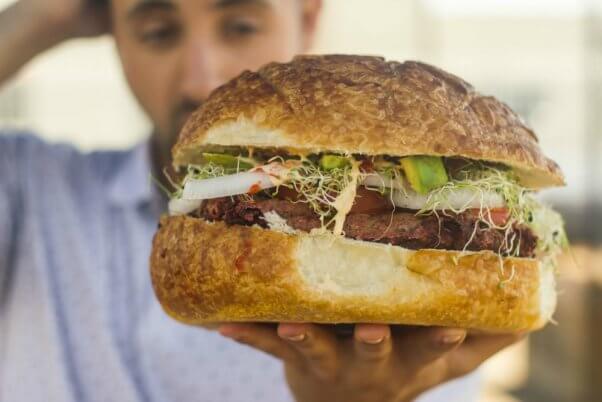 Note: You can also form the mixture into 4 average-sized patties and bake for 10 to 15 minutes on each side.

Cows are gentle giants—curious, clever animals who have been known to go to extraordinary lengths to escape from slaughterhouses. They’re also gregarious, preferring to spend their time with other cows, and they form complex relationships, much like dogs in packs.

But in the U.S., more than 29 million cows suffer and die in the meat and dairy industries every year. When still very young, many of them are branded (burned with hot irons), dehorned (their horns are gouged out or cut or burned off), and castrated (males’ testicles are ripped out of their scrotums)—all without painkillers.

So what are you waiting for? Now is the perfect time to pledge to go vegan!

I Want to Go Vegan!