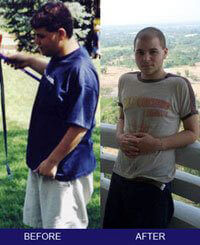 Growing up, I was always “the fat kid.” I never had a problem making friends, but from a very early age, I was very self-conscious about my size. I always wanted to look like my thin friends, but as I got older, I was just never able to drop what my mom affectionately referred to as my “baby fat.” I think she was the only person who thought it was cute.

In high school, I became friends with a vegan kid named Ryan, but at first it didn’t occur to me that I could be vegan too. The more I hung out with Ryan, the more I saw how easy it is to cut animal products out of your diet. I had always assumed that veganism was something that you had to actually work at, but it’s really not like that at all. Ryan would eat the same cereal as me for breakfast, but he would use soy milk instead of cow’s milk. For lunch, he would eat a sandwich and chips just like me, or he would just order a veggie burger with fries when we went out. I realized that veganism wasn’t about cutting things out of your diet but rather replacing what you already eat with healthier, vegetarian options.

I went from being a fast-food-loving meat-eater to a vegan overnight. I realized that being vegan isn’t about setting rules; it’s about making good choices. Within a year, I was down to 170 pounds, and all I did was replace the animal products in my diet with vegan alternatives. My favorite vegan food has always been soy sausage. After being vegan for just two years, I weighed 150 pounds, and I’ve weighed the same ever since. French fries are still my all-time favorite food, and I still eat at almost all the same restaurants as before, but now I’m saving at least 100 animals” lives every year. For the first time in my life, I don’t feel self-conscious about the way I look.

What are you waiting for? Request a free vegetarian starter kit to get started on a path to a slimmer, healthier you.