Few things make us squirm more than realizing that chicken periods are packed into cartons and sold by the dozen. It’s one of those things that doesn’t seem real, like a scene out of The Exorcist or a Halloween prank gone wrong. But chicken periods are exactly what you’re eating every time you fry, scramble, or bake with eggs. Have you ever cracked open an egg and found blood inside? It’s like a scary Carrie moment that’s sure to make anybody gag. Clean up in aisle six! 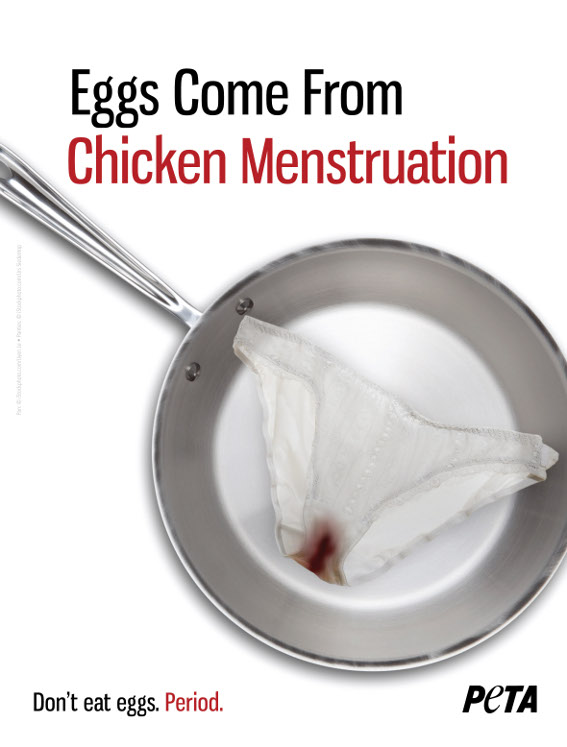 Not only is eating eggs nasty, it’s also cruel. The cruelty that chickens face is like something out of Saw—only it’s real. On factory farms, chickens are shoved into tiny wire “battery cages” and have large portions of their beaks cut off. They are crammed so closely together that they are forced to urinate and defecate on one another. It’s a real-life Human Centipede! Many birds die, and survivors are often forced to live with their dead and dying cage mates. Male chicks are considered worthless, so every year, millions of them are tossed into trash bags and left to suffocate or are thrown into high-speed grinders while they are still alive. Maybe that’s why all the birds were so upset in that Alfred Hitchcock film.

Leave all this insidious horror in the movies where it belongs by taking chicken periods off your menu for good. Order our free vegetarian/vegan starter kit for egg-free recipes and tips, and leave the bloody nightmare behind. Don’t eat eggs. Period.