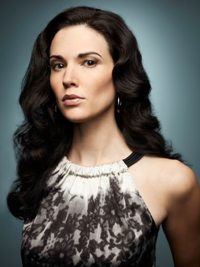 Actor Laura Mennell, who plays Nina on the Syfy series Alphas, tells PETA what inspired her to adopt a vegetarian lifestyle and dishes on animal issues, such as the Canadian seal slaughter and the companion-animal overpopulation crisis. Find out why Laura loves being a vegetarian and learn how you can incorporate helping animals into your daily life in this exclusive interview.

How long have you been a vegetarian and what inspired you to embrace vegetarianism?
I became a vegetarian at 15. I was always an animal lover and, as a teenager, became increasingly uncomfortable with the idea of eating meat. It was then that I started to research vegetarianism. It was actually PETA that inspired me to change and adopt a cruelty-free lifestyle—which is why I’m so excited about this interview! Learning about the horrors of factory farming and the suffering it causes so many defenseless animals forced me to make the switch.

Are there any books, films, or people that influenced you?
Aside from PETA’s original influence, films such as Earthlings (narrated by Joaquin Phoenix) have been extremely influential for me. Their ability to show how society treats animals is unsettlingly honest and something everyone should watch. These films reinforce my commitment to living my life as a vegetarian and make me want to be more active in animal rights. Mollie Katzen’s The Enchanted Broccoli Forest has, for many years, kept me creatively stimulated as a vegetarian cook. The cookbook contains many great recipes, including a wonderful shepherd’s pie dish, which I made the other night! Tanya Barnard and Sarah Kramer also have a wonderful series of cookbooks, my favorite being How It all Vegan, which makes cooking meatless meals fun!

Do you have any tips for your fans who are interested in exploring vegetarianism but aren’t really sure where to start?
It’s easy to become a vegetarian, especially now, because information is easily accessible through your local library, bookstores, and especially the Internet. If you’re thinking about becoming vegetarian right this second, Google it! It’s that simple. Most importantly, I’d start with understanding the basics of a vegetarian diet: Make sure you’re eating balanced meals. Becoming vegetarian can also be a lot of fun and gives you license to experiment with new cuisine! When I stopped eating meat, I fell in love with East Indian food—there’s so much selection, and they use the most beautiful spices. Why not drop by your closest Indian restaurant and give it a try? Or better yet, start experimenting with cooking your own curry dishes. There’s nothing better than enjoying some home-cooked aloo gobi! And if you’re really excited about cooking vegetarian, why not go to your local farmers’ market? Meet the people who grow your veggies and support your local farmers! Going to the markets is one of my favorite weekend activities, and it inspires weekly meals! I love buying fresh and organic produce.

What other animal issues are close to your heart and why (e.g., spaying and neutering, rescuing dogs and cats as opposed to buying them, the millions of animals who are beaten and skinned alive for the sake of fashion, cosmetics and product testing on animals, elephants and other animals who are beaten and forced to perform in circuses, etc.)?
I’m definitely an animal lover—and I stand up for all animals’ rights. Learning about factory farms and their horrendous treatment of animals is what made me become vegetarian in the first place. I also support the education of the public on adopting pets from animal shelters or saving homeless animals off the street in lieu of buying them from pet shops. Millions of animals are euthanized every year because shelters can’t find homes for them. Buying animals from pet stores also tends to support puppy and cat mills—many of which have deplorable conditions for animals, which shouldn’t be tolerated. Additionally, because of animal overpopulation in shelters, we must spay and neuter our pets—it’s another huge solution to this issue. The harming of animals for any reason is shameful, but torturing them for mere vanity is senseless. Slaughtering animals for their fur or harming them for cosmetic purposes is disgusting and not worth the perfect shade of lipstick.

Most Canadians are outraged that the largest slaughter of marine mammals on Earth—the annual seal slaughter—is still taking place, despite international outrage and the fact that the European Union, the U.S., and other markets have banned the sale of seal products. What are your thoughts on the slaughter and the government’s desperate attempts to prop up a dying industry?
The large-scale commercial seal hunt in Canada is appallingly inhumane, disgusting, and something I—and many Canadians—are embarrassed to be associated with. It’s unfathomable that the Canadian government supports the annihilation of so many beautiful, defenseless creatures in the name of greed, fur, and useless vanity products. It’s senseless and barbaric.

Do you have any animal companions at home? If so, what are their names, and how did they become a part of your family?
I have a cat named Louie, who is pretty much “my furry, four-legged child”—that’s what I call him. He’s a sweet and affectionate little guy who’s also a bit devilish at times! He’s black and white and has a funny lopsided goatee. I found him in the wilds of rural Manitoba, where he was a homeless kitten living in an abandoned residential school. He was so scared when I found him, and when he finally let me pick him up, he was shaking and purring all at the same time. I fell in love with him and knew I couldn’t leave him there. So, I called my roommate at the time, Jessica, and convinced her to allow a third cat in our household, and I bought the last animal airfare on my flight home. It’s kind of amusing—black and white homeless kittens seem to find a way into my life. My previous cat Michat (pronounced Mee-sha) was also a rescued cat.

What are some simple things that people can do every day to help animals?
Keep your shopping list cruelty-free: Look for toiletries that haven’t been tested on animals. Refuse to wear fur or buy products filled with down feathers. Stop buying animals at pet stores. Adopt your next pet, and tell others to do the same—shelters are overcrowded with animals, most of whom will be euthanized if they don’t find homes. Speak out against animal cruelty by writing letters or e-mails of disgust to companies who abuse and or test on animals. Sign petitions!