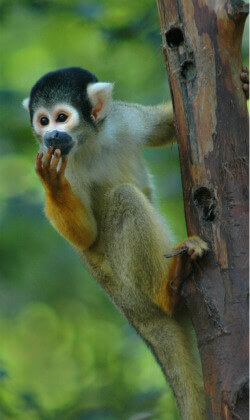 Are animals conscious in the way that we are? What goes on in their minds? I can’t say for sure, but it doesn’t surprise me that elephants distinguish between different human languages as they listen to us or that dolphins have a strong sense of self and can think about the future.

I sometimes run into rankings of the world’s smartest animals, a list that usually includes humans at the top (hmmm, I’m suspicious already) and dolphins, chimpanzees, pigs, dogs, parrots, and so on down a ladder of some sort. But these IQ comparisons use human abilities as the yardstick by which to judge all others—they’re rigged! How would people score on a bat’s IQ test, I wonder? We can’t even begin to locate flying mosquitoes by screaming and listening for the echo, let alone catch them in the air while flittering around in the dark night sky. Let’s face it: Humans flunk that test with a score of zero. Ditto for the robin IQ test, and the zebra one, and the honeybee’s.

Animals freely pursuing their own lives are all brilliant at doing whatever it is that they normally do: locating food, making homes, finding mates, avoiding predators, migrating, and so on. And along the way, they feel joy and love and hate and fear and pain. What really amazes me is that some of them pack so much mental ability into such tiny packages.

Our best guess is that all vertebrates have similar sentience. Differences abound, but conscious awareness of our surroundings is based on kindred neural processing, even if different sensory input is used to construct mental pictures. The bat probably surveys the night sky and has a field of view—an image-in mind based on echolocation instead of vision. In fact, people can learn how to use sound instead of vision to construct mental maps as well. We are of one mind, in a sense.

But what is it like to be, say, an insect? That’s tougher to fathom, because our bodies are so different. Recent research indicates that there is a lot going on in the minds of insects: They are likely to be conscious, not just tiny mindless robots. Are bigger brains better? Not necessarily. A lot of what bigger brains do is supply sensory input from bigger bodies, innervate more muscles, produce more detail, add finer resolution, maintain larger memory banks, and so on. But there is no reason to suppose that the extra information processing going on in bigger brains results in higher consciousness or higher intelligence when it comes to making the kinds of decisions that animals make in their daily lives. Consider a honeybee: A worker has at least 59 different behavioral skills, all of which require making a series of decisions. The bee’s mental activity includes a stream of decisionmaking, and he or she is probably actively aware of that process. There is an actor involved in deciding what to do at any given moment, not just a hard-wired robot programmed with a series of reflexes. There is something that it islike to be a honeybee as opposed to an electronic gadget programmed to behave like one. And there appears to be no minimum brain size to feel pain.

What about animals who don’t move? Is a sea anemone conscious? You tell me.