They not only lay it on the line every day but also rescue cats from fires, dogs from frozen lakes, and ducks from storm drains. But when PETA heard about what was cooking in Vale, North Carolina—a little Lincoln County burg in the rolling foothills of the Appalachian Mountains—we found yet another reason to love these heroes.

Last month, 15 firefighters at the Union Fire Department (which recently rescued a horse from a river) dug into a vegan meal prepared by one of their own, David Wilson. Here’s how it came about:

David has been a volunteer firefighter going on four years now (his day job is at Wells Fargo), and his colleagues—who were unfamiliar with the joys of tofu—were curious about what a vegan firefighter eats. When they learned about the health benefits of going vegan—such as lower rates of suffering from heart disease, diabetes, cancer, and obesity, among other things—they asked David to veganize one of their favorite meals. 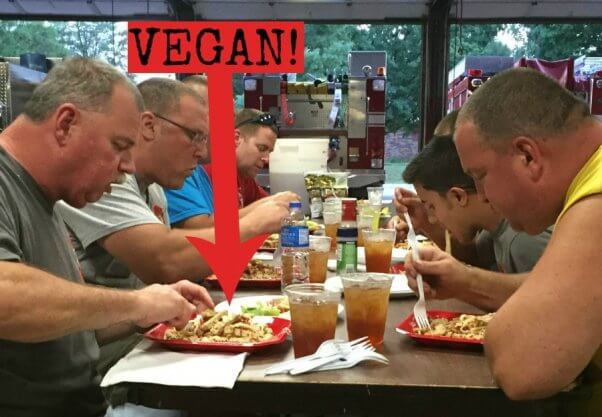 He happily obliged, and the crew put the dish up for a vote, even setting up an online poll.

Vegan chicken alfredo with Beyond Meat chicken came out a winner. David served it with garlic bread, a side salad, and sweet tea, and for dessert, he baked his specialty: mocha chip cookies made with fresh-ground coffee beans. 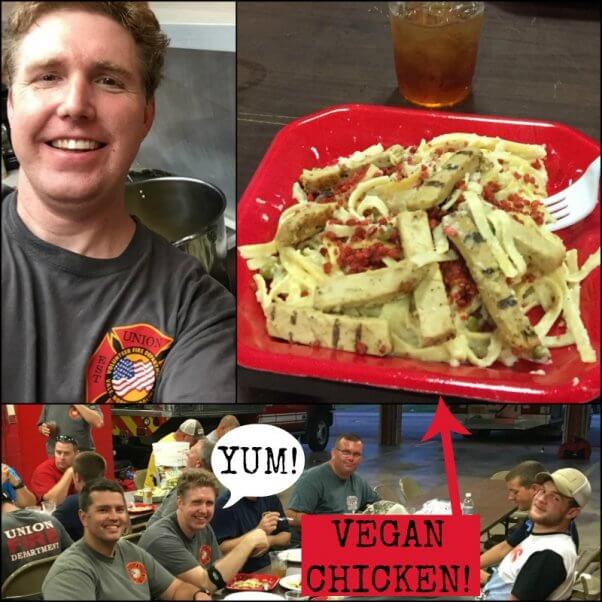 The crew scarfed down the protein-packed meal. The chief pronounced it “awesome,” one firefighter raved about the smoky vegan bacon bits, and another texted, “Way to go! It was a big hit!”

The dinner was such a success that David, who’s big on Southern comfort food, plans to share more vegan meals and recipes with his firefighting friends, like mouthwatering Sloppy Joes. It turns out that the chief is particularly excited about trying David’s vegan lasagna.

Firefighters: You gotta love ’em (and look after ’em).

Why not go vegan? Check out The New York Times bestseller Engine 2 Diet for tips and recipes, and take the vegan pledge!