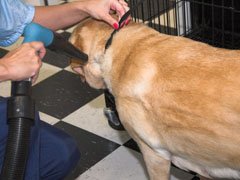 The difficulty of coping with an animal companion’s injury or death is compounded when you suspect that a veterinarian’s negligence or abuse may be to blame. You can help protect your animal before tragedy strikes by looking for a skilled and caring veterinarian (ask for references from trusted friends and humane organizations, and call the local Better Business Bureau, Chamber of Commerce, and State Board of Veterinary Medical Examiners to check for complaints), seeking a second or third opinion about your animal’s diagnosis before proceeding with surgery or treatment, and carefully monitoring your animal’s stay and treatment at veterinary clinics. Never hesitate to ask questions about your animal companion’s treatment, and never leave your animal overnight at a veterinary hospital unless you are convinced that it is necessary and in your animal’s best interests to do so.

What You Can Do if You Suspect Malpractice
There are several steps that you can take when you suspect that veterinary malpractice has led to your animal companion’s injury, sickness, or death.

First, send a concise, accurate, and factual written complaint (including what happened, when, and where) to your state veterinary licensing board asking for an investigation and a response. Follow up on your written complaint by calling the licensing board. You should also submit a complaint to your local veterinary medical association asking for an investigation. Any veterinary clinic should be able to provide you with the addresses for the state licensing board and veterinary medical association, or you can search the Internet or look in the phonebook under state agencies. File copies of your complaints with the Better Business Bureau, local and state consumer affairs offices, and the local animal control agency or humane society as well.

You can also file a small-claims suit against the veterinarian by filling out a form and paying a small fee at your local courthouse. You are responsible for presenting your own case in small-claims courts, so be sure to have copies of all your animal’s medical records (including the results of the necropsy, if performed), statements from other veterinarians who examined your animal after you suspected negligence, and copies of your veterinary bills. Although small-claims courts award only “out-of-pocket” expenses or the cost of replacing your animal companion if he or she dies, the attention generated by your case may be enough to prevent a veterinarian from acting irresponsibly in the future.

You can also hire a lawyer to help you bring a malpractice lawsuit against the veterinarian or negotiate a settlement. As with a small-claims suit, you will need documentation to back up your case, including statements from expert witnesses (such as veterinarians, pathologists, and others with special professional knowledge of the issues under consideration). You may find that many lawyers hesitate to take on these cases because the potential for a large monetary award is low. In most veterinary-malpractice cases, awards are limited to the costs incurred plus the cost of replacing a companion animal with an animal of similar “value.” Some state courts, however, are beginning to acknowledge the unique nature of the bond shared between humans and their animal companions. These courts also permit the recovery of “reasonable sentimental value” in some instances.

To find a good attorney, ask your local bar association for a recommendation. Regardless of what action you decide to take, consider contacting local newspapers and television stations. Your story could help protect other animals from harm.

Grooming Accidents
Incidents in which animals are seriously injured or even killed at grooming salons are alarmingly common.

Many animals have suffered from heat exhaustion as a result of being left unattended in front of dryers, where temperatures can reach 135 degrees Fahrenheit.(1)

Groomer negligence causes many horrific injuries and deaths, such as these:

Groomers have been observed and even caught on video physically and emotionally abusing animals.

Accident Prevention
The best way to prevent accidents is by using a groomer who makes house calls so that both your animal companion and the groomer are under your supervision. If that’s not possible, ask to be present during the grooming.

In addition, the following measures will help to ensure your animal’s safety:

What You Can Do if a Grooming Accident Occurs
You can help prevent grooming accidents by contacting your local and state representatives and pushing for stronger regulations in the grooming industry. Lives can be saved and tragic accidents can be prevented through laws that require groomers to use only dryers that must be reset after a period of time rather than those that reset without a break, laws that set time limits on tethering and establish standards for the types of tethers that may be used by groomers, and laws that prohibit the use of sedatives or tranquilizers.

If your animal companion becomes injured at a grooming salon, you can file a small-claims suit or a lawsuit against the groomer or salon. Remember that a story about your animal companion’s injuries on a local television station or in the newspaper can help prevent future tragedies. Public awareness is a powerful tool.