Next in our feature series on Powerful PETA Women, we hear from Vice President of International Affairs for The PETA Foundation UK, Poorva Joshipura. Also check out the features from  Tracy Reiman and  Lisa Lange for their takes on what life has been like at PETA.

Here’s what Poorva has to say about her work life:

I started working for PETA at age 23, but I joined the PETA family much earlier as an intern and, before that, as a volunteer and supporter when I was 16. That’s when I first got my hands on a copy of PETA’s Animal Times magazine. I’m now 41. So I’ve been part of the PETA family for more than half my life. 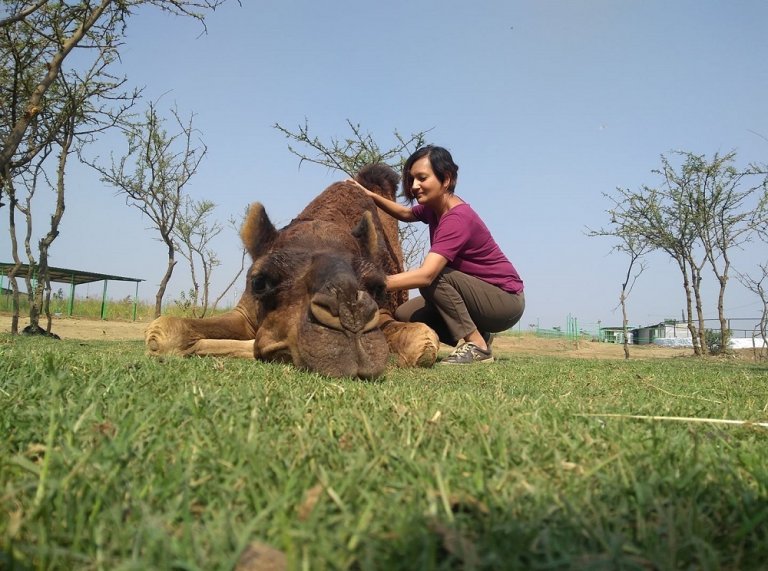 Poorva with Sameer, a rescued camel.

Growing up, I faced racist and sexist bullying in school. These experiences made me determined to spend my life fighting injustice. They also led me to see what’s wrong with all negative “isms,” not only racism and sexism but speciesism, too.

School isn’t the only place where I’ve faced bullying. Take, for example, my work with PETA India to stop jallikattu, a cruel “game” during which men form huge, yowling mobs to chase bulls who, totally spooked, try to run for their lives. Some of them die in the process, and many suffer broken horns and worse. When I spoke out against this practice, I received death and rape threats—some protesters actually burned me in effigy and called me a whore on social media. But having my PETA family strong around me and the support of other women in the organization—and men, too—gave me even more confidence to fight for the bulls’ rights. 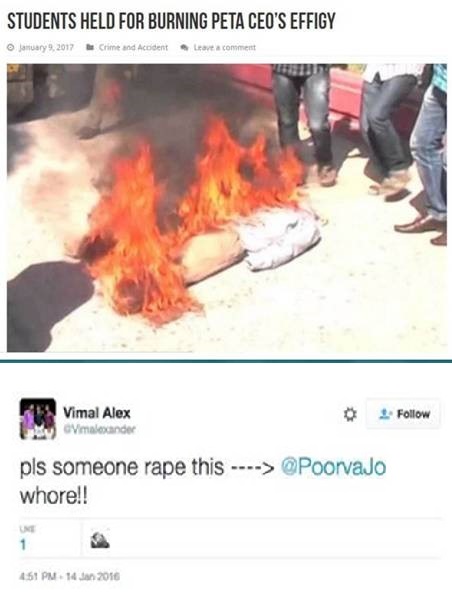 During my visits to slaughterhouses and laboratories in Asia, I was usually the only female for what felt like miles around. The male workers, armed with knives and even axes, would stare at me and try to intimidate or harass me, waggling animal guts in my direction and so on. At these times, I would think of the other PETA women who have done investigations or faced abusers, and it would give me the strength I needed to disregard those men and carry on.

When I refer to PETA as family, I mean it. Our values bind us together. We are animal rights activists, absolutely, and we are also feminists, supporters of LGBTQ rights, anti-racism, champions of other human rights movements, and advocates for environmental protection. Perhaps because of the bullying I’ve faced, this culture of compassion for all has been especially appealing to me. We care about those who may seem the most different from us, who might have feathers or fins, and we care about the rights of all. We are all animals, after all!

At PETA and affiliates, we are encouraged to work hard and to use our voices to help those who are oppressed. We believe that all the negative “isms”—from sexism to speciesism—share common denominators of fear, ignorance, exploitation, discrimination, and bigotry and that those who want a more just world must work to end all prejudice, not just the kinds that directly affect those they relate to most or only our own species.