Women have always ruled PETA—from its founding in 1980 by our president, Ingrid Newkirk, to today, with women holding seven of our 10 top executive positions, including the very top two. Tough, smart, and strategic female activists make up a whopping 80 percent of our workforce, and together, we’re changing the world for our sisters of all species—by pioneering eyewitness investigations, persuading major corporations to change cruel policies, popularizing cruelty-free vegan living, and so much more.

Here’s what Tracy Reiman, one of the women who run PETA, has to say about her work life:

I came to PETA at age 23, passionate, idealistic, and full of energy and enthusiasm. Now, 26 years later, I still come to work every morning feeling the same way, despite the hideous abuse that we witness every day. That’s thanks largely to the women at PETA who mentored me, encouraged me, and helped shape me in those early days and every day thereafter.

When I got pregnant at age 34, Ingrid and the rest of the PETA leadership fully supported and encouraged me. I couldn’t wait to get my son involved. He attended his first protest when he was just 4 weeks old (and slept through the whole thing!). Last year, he and I celebrated a milestone: the closure of Ringling Bros., a cruel institution that we’d protested together since he was a baby. 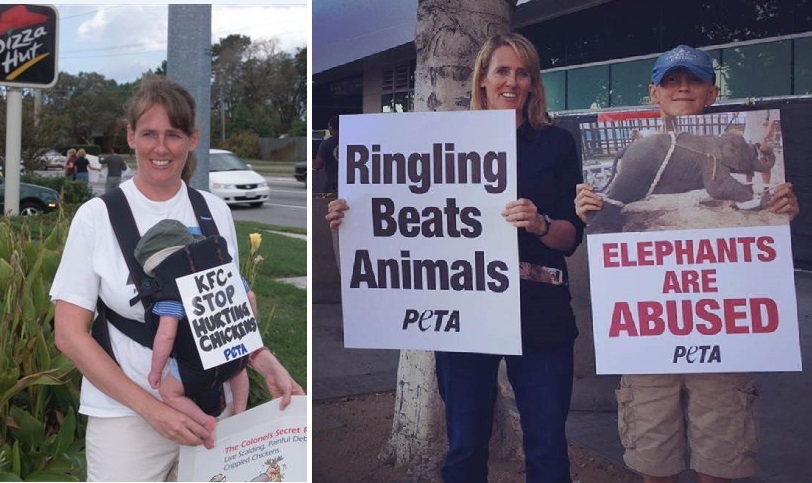 Tracy with Jack protesting at 4 weeks old and 13, just before Ringling Bros. called it quits.

Having experienced sexual harassment outside the workplace, I am so grateful that I have never known what it is like to work in a hostile environment. I have never felt belittled, discriminated against, or worried about the people around me. I work in a place where people are respected for their thoughts, ideas, creativity, and hard work and where every day I am challenged—by the work, my colleagues, and the motivation to stop animal suffering.

I became one of the women who run PETA—first as a director and later as executive vice president—and I’m honored to pass those values on to the next generation of PETA women.

PETA is a place where everyone is encouraged to speak up—to use their voices to help those who are often ignored. We acknowledge that all the negative “isms”—from sexism to speciesism—share a common denominator of fear, ignorance, exploitation, oppression, and bigotry and that people who want a more just world must work to end all prejudice, not just the kinds that directly affect our own species.