Next in our feature series on the powerful women who run PETA, we hear from the remarkable Kathy Guillermo. If you missed our recent feature from Poorva Joshipura who details how a strong PETA family helped her overcome vicious sexism from critics, check it out here.

For nearly 30-years, Kathy has worked to expose and end cruelty to animals in the experimentation and horse racing industries. She’s spearheaded landmark PETA victories against government agencies like NASA and the U.S. Military and major corporations like Unilever. Kathy has also penned a book about the Silver Spring monkeys, the case that launched PETA into national prominence.

Here’s what Kathy has to say about her work life at PETA:

PETA made it possible for me to work and care for my child in a way that was revolutionary for the time. When I started working here in 1989, my daughter was 6 months old. I didn’t want to put her in daycare, so PETA adapted my office to give me private space and made my door into a Dutch door so that I could have the top half open and still contain a baby who was learning to crawl. She was even welcomed to staff meetings—it was truly amazing and supportive. I remember Ingrid saying, “We have all these dogs here—why not a baby?” 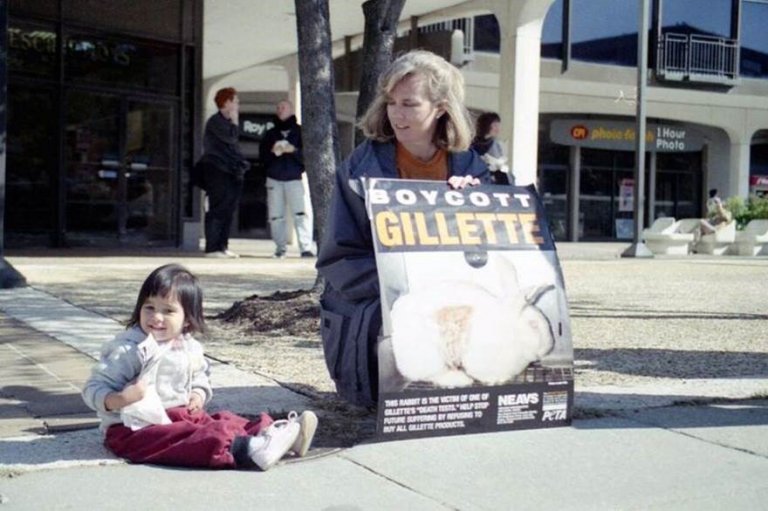 Kathy with Jilly in 1990: “She went where I went, in the office and out.” Gillette stopped testing on animals in 1996 after a relentless PETA campaign.

Later, when I moved to California and was expecting my second child, I became PETA’s first full-time employee to be allowed to work from home. In 1994, this was not at all common, anywhere. We didn’t even have e-mail yet. This allowed me to end cruel experiments on animals and raise my kids.

I don’t think any other organization would have gone to such great lengths for a working mom or have been as adaptable.

At PETA and affiliates, we are encouraged to work hard and to use our voices to help those who are oppressed. We believe that all the negative “isms”—from sexism to speciesism—share common denominators of fear, ignorance, exploitation, discrimination, and bigotry and that those who want a more just world must work to end all prejudice, not just the kinds that directly affect those they relate to most or only our own species.