In his first-ever public service announcement for PETA, “Prince of Darkness” Ozzy Osbourne is exposing the cruelty behind the practice of declawing cats in his own characteristic—and bloody—way. Take a look: 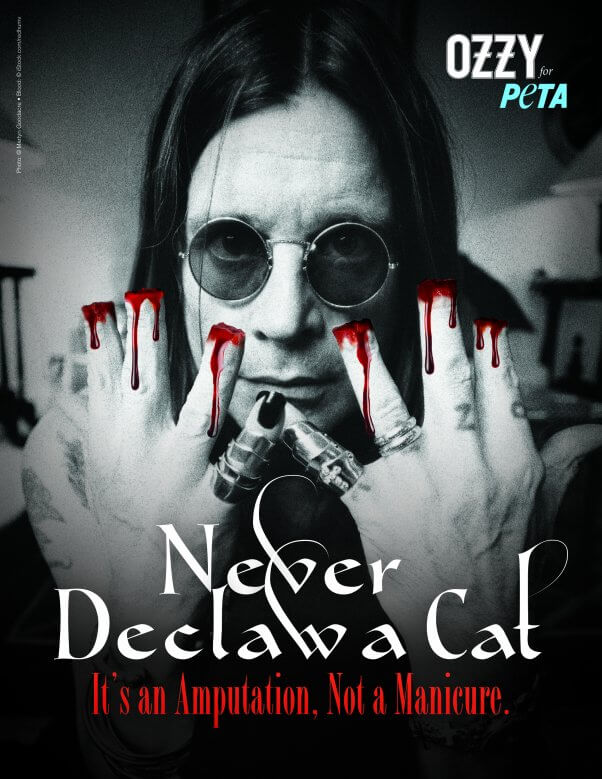 “Amputating a cat’s toes is twisted and wrong. If your couch is more important to you than your cat’s health and happiness, you don’t deserve to have an animal! Get cats a scratching post—don’t mutilate them for life.”

While misinformed guardians may think it’s nothing more than a manicure, declawing is actually a serious surgery involving 10 separate, painful amputations. Without their claws as a first line of defense, cats feel so insecure that they tend to bite more often as a means of self-protection. And even housetrained cats may urinate and defecate outside the litterbox in an attempt to mark their territory when their claws have been taken from them.

For the Osbournes, collaborating with PETA to speak up for animals is very much a family affair. Ozzy’s wife, The Talk cohost Sharon Osbourne, worked with PETA to expose the cruelty of the fur industry by narrating an exposé on the chinchilla fur trade and donating her fur coats to PETA. And Ozzy and Sharon’s compassionate daughter Kelly posed for PETA’s “Save the Seals” ad series to help show the world how seals are bludgeoned for their fur in Canada’s gruesome annual seal massacre.

Nearly two dozen countries—including Australia, England, and Japan—have prohibited or severely restricted veterinarians from performing the painful, permanently crippling, and mutilating procedure. And in the summer of 2019, Gov. Andrew Cuomo made history when New York became the first state in the U.S. to ban the declawing of cats.

Guardians looking to protect their furniture and their felines can check out humane ways to prevent cats from scratching on furniture. You can find even more help in PETA President Ingrid Newkirk’s book 250 Things You Can Do to Make Your Cat Adore You.