It’s officially illegal to declaw a cat in the Empire State. The feline-friendly bill was first introduced in 2015 by New York State Assembly Member Linda Rosenthal. Yesterday, four years after its initiation, New York Gov. Andrew Cuomo made history by signing it into law, making the state the first in the U.S. to ban the declawing of cats.

VICTORY! It’s now illegal to declaw cats in the state of #NewYork! 🙌

Declawing is a painful & unnecessary mutilation. RETWEET if you want ALL states to ban it! #BanDeclawing pic.twitter.com/LZAMG7TrvQ

Declawing—which involves the amputation of claws, bones, and cartilage—is a painful procedure that should almost never be performed. (The bill includes an exception for medical conditions that require a claw or more to be removed to combat an infection or tumor.) The human equivalent to declawing would be the amputation of the last section of each finger. The procedure is permanently crippling, too: Removing a cat’s claws and the bones and cartilage that hold them in place can cause the animal to have difficulty balancing, climbing, stretching, leaving scents, and defending themselves—and these are innate functions that allow cats to be cats. There are many effective and humane alternatives to declawing that can help prevent cats from leaving a few scratches on the couch, so why hasn’t every state already banned the cruel practice?

Learn more about the reasons why guardians should never have their feline companions declawed and why every other state should initiate a ban, too.

PETA supports animal rights, opposes all forms of animal exploitation, and informs the public on those issues. We don’t directly or indirectly participate or intervene in any political campaign on behalf of or in opposition to any candidate for public office or any political party.

New York State Assemblymember Linda Rosenthal is the cat’s meow: She has introduced a bill that would ban declawing (a misnomer if ever there were one) statewide. The only exception would be a medical condition that requires a claw or more to be removed to combat an infection or tumor.

“It’s basically done because humans want it done, and I don’t think it’s our right to mutilate our animals for our own satisfaction,” Rosenthal told Gothamist. “I think it’s totally unethical to perform these kinds of amputations on cats.”

Cats everywhere agree, and here’s why: Declawing is like taking a hatchet to a hangnail—literally. It involves 10 separate, painful amputations, severing not just the nails but also the whole joint, including the bones, ligaments, and tendons. As veterinarian Louise Murray puts it, “If you look at your fingers, declawing would be like amputating the last section of each finger. If you were declawed, you would have 10 little short fingers. It’s amputation times 10.” 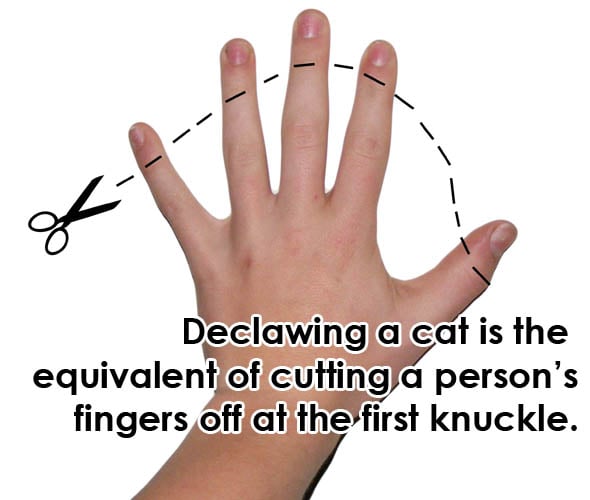 Complications of this disfigurement include chronic pain, nerve damage, hemorrhaging, bone chips, recurrent infections, abnormal regrowth of the nails inside the paws, and behavioral problems such as biting and spraying.

Scratching is a natural behavior that allows cats to stretch their muscles and condition their claws. Humane ways to prevent cats from scratching on furniture include trimming their nails regularly and providing cats with lots of scratching posts scattered around the house. (Find more tips in PETA President Ingrid Newkirk’s book 250 Things You Can Do to Make Your Cat Adore You.)

Declawing has already been banned in England and parts of Europe. West Hollywood, California, was the first city in the U.S. to ban it (and several other cities in California have followed suit), but New York would be the first state.