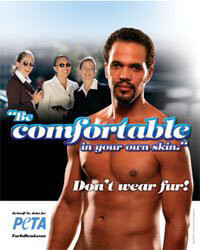 His onscreen marriage was almost broken up by his TV wife’s nude photo shoot, but that didn’t stop The Young and the Restless soap stud Kristoff St. John from stripping in front of a camera. His motive wasn’t revenge or money—it was compassion.

The Emmy Award–winning actor is the latest star to pose for PETA’s “Rather Go Naked Than Wear Fur” series. The ad shows St. John baring all in front of a flock of admiring fans and carries the tagline, “Be comfortable in your own skin. Don’t wear fur.”

“In my TV job, I have to deal with some pretty ruthless characters,” says St. John. “But I can’t think of anything more heartless than to torment and kill animals in the name of fashion.”

Animals raised on fur farms often suffer from severe illnesses and injuries without veterinary care and are exposed to the elements in tiny, filthy cages. They are killed by electrocution, gassing, poison, or having their necks broken. No federal laws protect animals on fur farms. Trapped animals can spend days in agony, tearing flesh and breaking bones in a struggle to free themselves, before the trapper arrives to beat or stomp them to death.

This isn’t the first time that St. John has spoken out in behalf of animals. A vegan since viewing PETA’s “Meet Your Meat” video, St. John also appeared with his daughter Lola in PETA’s anti-circus television public service announcement.