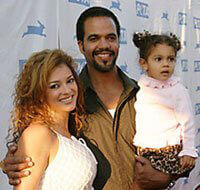 In one of PETA’s television public service announcements (PSA), The Young and the Restless actor Kristoff St. John and his daughter Lola explain that they won’t be attending any circuses with animals in them because of the violence used to train the animals and the unsuitable conditions that they are kept in.

In the PSA, the Emmy-winning soap stud asks, “What kind of life is that?” after undercover footage shows tigers crammed into cages barely big enough for them to turn around in and trainers using electric prods and bullhooks to force elephants to perform.

In their real homes, animals would be free to raise their families, forage for food, and play together, but animals in the circus are forced to perform difficult tricks that demean them and reveal nothing about their true natures. Trainers routinely jab steel-tipped bullhooks into elephants’ sensitive areas, such as their ears, trunks, mouths, chins, and feet, which results in oozing sores. Big cats are dragged by heavy neck chains and hit with sticks, bears are whacked and prodded with long poles, and chimpanzees are kicked and hit with riding crops.

Kristoff, who also posed for a racy anti-fur ad for PETA, joins the ranks of María Celeste, Dick Gregory, and Alec Baldwin, who have all appeared in anti-circus PSAs.