Baseball season is in full swing, which means fans are looking for the best vegan stadium food they can find—and PETA’s here to help. These stadiums go beyond peanuts and Cracker Jack (which we love, too, of course). Many are partnering with brands such as Beyond Meat and Field Roast to give baseball fans a classic game-day experience while others are stepping it up with vegan nacho cheese, soft serve, and other items.

So don’t strike out for animals—choose vegan options at the ballpark and spare countless cows, pigs, and other animals, who don’t want to be stuffed between buns. And be sure to pick up your “arm barn” gear before heading to the game to show your true fandom.

Our 2019 winner is impressing everyone again this year! Globe Life Field in Arlington, Texas, is a vegan’s dream, with a Beyond Meat partnership and vegan food carts that offer tons of options in sections 16 and 101. Here’s some of what you may find: vegan ballpark nachos with Credo Foods nacho cheese, Beyond Burgers with Field Roast Creamy Original Chao Slices, vegan hot dogs from Field Roast (which can be smothered in Credo Foods nacho cheese and vegan chili), Oatly soft serve (in vanilla, chocolate, or swirl flavors), Beyond Brats, Beyond Meat vegan chicken wraps, MorningStar Farms Veggie Corn Dogs, and vegan chicken salad sandwiches.

Local vegan meat shop The Herbivorous Butcher provides fans in section 129 at the Twins’ home stadium in Minneapolis with flavorful sausages. You can also find vegan Indian chana from Hot Indian Foods in section 120 and vegan burgers in sections 109 and 305. (Be sure to order yours without cheese or mayo, and check whether the bun is vegan.)

Progressive Field, home of the Cleveland Guardians, has quite a few delicious and unique vegan choices—and we love that a lot of them are from local restaurants. Here’s what you can find: vegan grilled cheese sandwiches from Melt Bar and Grilled in section 113, vegan tacos from Barrio in sections 109 and 529, and vegan hot dogs in section 159 along with dairy-free ice cream from Sweet Moses and vegan burgers. 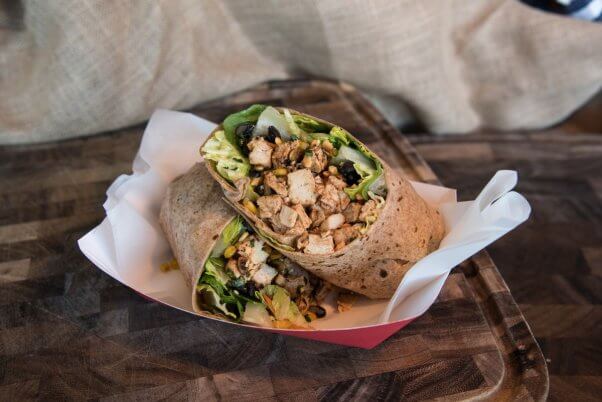 Citi Field impresses with a dedicated vegan concession stand as well as other options spread throughout the park. Marty’s V Burger offers Beyond Burgers with melted vegan cheddar cheese and special sauce, Shroom Steakhouse Burgers with melted vegan mozzarella and sautéed mushrooms, Beyond Meat bratwursts, and chicken sandwiches. Likewise, the Vegan City stand offers nachos with vegan cheese, Beyond Burgers with vegan cheese, Beyond Sausage with peppers, and Dole Whip sundaes and ice cream floats in pineapple or strawberry flavors.

Dodger Stadium offers its own vegan version of the famous Dodger Dog, in addition to citrus-marinated tempeh nachos with pico de gallo, black beans, and mashed avocado on crispy tortilla chips and Beyond Sausage Brats topped with grilled peppers and onions.

Fans can get Beyond Brats, Beyond Burgers (with a brioche bun and no cheese or special sauce to make it vegan), spicy tofu tacos, and more.

Kansas City, Missouri, is known for its barbecues, so we love to see some vegan options at Kauffman Stadium like Beyond Meat brats and burgers as well as vegan coleslaw, which you can find at 203 Marketplace, Diamond Club, Rivals, and Craft & Draft.

Note: Menu offerings are subject to change and availability. Be sure to check at the concession stands for the most up-to-date listings.

If you’d like to see the vegan menu at your team’s stadium be expanded, speak up and tell the concessionaires to play ball.

Learn more about vegan food at baseball stadiums on The PETA Podcast.