They’re devoted to keeping pure bloodlines, labeling “mixed breeds” as inferior, and creating a dominant “master race” that meets their prejudiced ideas of “perfection.” The only things that the American Kennel Club is missing are the pointy white hats.

The parents in this spot can’t wait for their teenage daughter to get out there and start making babies! Because, honestly, who really cares about a few unwanted children when there’s a chance to get some action, right? PETA’s new spot about the animal overpopulation crisis makes a startling comparison that shows exactly how absurd it is when animal guardians refuse to spay or neuter their cats and dogs.

Buy One, Get One Killed

If people who bought dogs from breeders had to face the consequences right then and there, they’d be a lot more likely to do the right thing and adopt from an animal shelter instead. No matter how you do the math, buying an animal from a breeder adds up to killing a homeless animal in an animal shelter. In this new hard-hitting spot for PETA’s ABC campaign, one unfortunate family figures this out the hard way.

If we all acted like dogs, the pungent smell of someone else’s bottom would be better than an iced latte in the morning, a brimming garbage can would look like a buffet, and a trip to the singles bar would always end in a hot date. That sounds like a whole lot of fun—until you start thinking about the social consequences of holding extended bottom-sniffing sessions every morning, having overturned garbage cans in every kitchen, and bringing a new baby into the world whenever two adults so much as catch a whiff of each other.

Watch more of our hard-hitting videos about animals, and start taking action now.

When the Protectors Need Protecting: Cruelty to K-9s

Dog Rescued by PETA Is a Real Rock Star 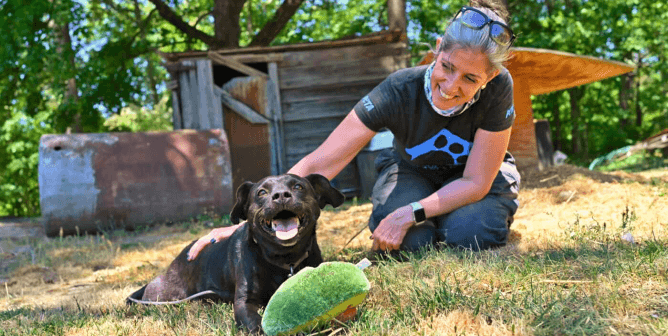