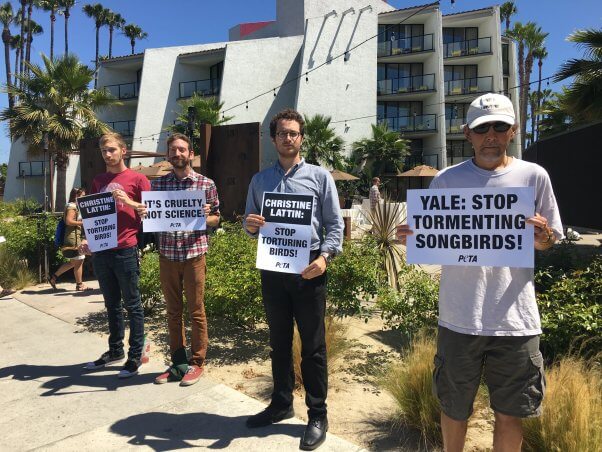 PETA notes that since 2008, Lattin has trapped wild songbirds and forced them to endure painful and traumatizing procedures in chronic-stress studies. She’s subjected sparrows and other birds to injections in order to destroy their adrenal glands chemically, she’s inflicted wounds on birds’ legs using a biopsy punch and without painkillers, she’s rattled their cages every two minutes and restrained them in a cloth bag, and she’s fed crude oil mixed with feed to sparrows, among other procedures. At the experiments’ end, the birds have been killed.

NO animal deserves to have their legs wounded, be fed crude oil, or be confined to a cloth bag! An experimenter at @Yale University is tormenting birds in wasteful experiments whose results won’t even apply to humans or other bird species. Leave a comment on @Yale’s Instagram urging them to STOP supporting this!

Lattin’s deadly experiments are meaningless to conservation efforts, to humans, and even to birds, since species vary widely in their physiological responses to chronic stress. PETA is calling on Yale University to shut down Lattin’s cruel laboratory.

Since PETA’s inception and the landmark Silver Spring monkeys case, we’ve been working to expose and end the abuse of animals in barbaric medical experiments at universities, hospitals, contract laboratories, pharmaceutical companies, and government agencies. These facilities imprison millions of animals and squander billions in taxpayer dollars and charitable donations each year to conduct cruel experiments that cause immense pain and misery and are irrelevant to human health.

Even a Yale Professor Says Experiments on Animals Are Wasteful

Last year, Dr. Michael Bracken, professor of epidemiology at Yale University’s School of Public Health, gave a lecture during which he argued that experiments on animals are wasteful and inefficient—noting that nearly 90 percent of biomedical research wastes money and resources and could be harmful to people’s health. “There is never any justification for the use of animals or humans in poorly designed studies,” Dr. Bracken said.

More and more, forward-looking scientists are turning to modern, non-animal research methods that are faster, cheaper, and more reliable. The PETA International Science Consortium Ltd. has been actively involved in the development of new toxicological testing methods and has been actively providing technical support to companies and researchers seeking to replace and reduce the use of animal tests. To date, PETA and its international affiliates have provided more than $3 million in funding for promising non-animal test methods and other alternatives to replace animal use.

If you weren’t able to attend Wednesday’s demonstration, don’t fret—you can still help the birds systematically tormented in Lattin’s experiments. Click the button below to urge Yale University to stop supporting this cruel torture.