In Bethesda, Maryland—a wealthy, well-manicured suburb of Washington, D.C.—the nation’s elite dine, entertain, and relax in bright, spacious homes. But not every dwelling is a paradise. Just ask the monkey Sam Smith. He’s been trapped there at the National Institutes of Health (NIH) in a cage no bigger than a telephone booth, alone, for 13 years.

Experimenters at NIH likely named Sam Smith after a type of beer, just like Guinness and other monkeys in Murray’s laboratory. His medical records, obtained by a public records request to NIH, paint a wrenching portrait of an individual battered by years of pain and trauma. His skull has been sawed open and part of his brain sucked out. He’s been starved, sedated, strapped into restraints, and forced to endure numerous painful procedures. On many occasions, staff have seen him curled into the fetal position in his cage, rocking back and forth listlessly, desperate to soothe himself. But the experiments on him continue.

Although his forebears likely ran free with their families in Asia, Sam Smith was unlucky enough to be born into captivity at Alpha Genesis, a South Carolina company that breeds and sells monkeys into lives of physical and psychological torment at U.S. laboratories. He was just over 2 years old when workers stuffed him into a cramped wooden crate and loaded him into the back of a truck headed for NIH.

The more than 500-mile journey to Bethesda would have been frightening and disorienting for Sam Smith, engulfed in the darkness of the truck and assaulted by the sounds and smells of perhaps dozens of other terrified monkeys. Monkeys bound for a life of experimentation don’t get rest stops to stretch their legs. Hunched in the tight space of his crate, he was likely hungry and dehydrated, jostled about with every bump and pothole.

At the end of this excruciating journey was not freedom but rather the promise of confinement in another cramped cage, where any remaining shreds of control that Sam Smith possessed over his own life would be stripped away. To experimenters, he would be nothing more than an unfeeling piece of laboratory equipment—to be cut open and manipulated in whatever way suited their ends.

Sam Smith Is Trapped in a Nightmare

At NIH, the unending stress and frustration of confinement consumed Sam Smith. Within months, he began circling agitatedly in his cage, desperate for stimulation. His glossy, full coat grew patchy and thin as he ripped out his own fur—first on his shins, then on his shoulders, then on his tail, back, and cheeks.

But Sam Smith’s nightmare was just beginning. In 2010, he’d become the newest victim of one of NIH’s most prolific torturers-in-residence, primate experimenter Elisabeth Murray.

Sam Smith had been on Murray’s roster for just a few months when experimenters yanked him from his cage, restrained him on a metal operating table, and sawed off a portion of his skull. They injected part of his brain with toxins, causing irreversible damage. Languishing in pain after the invasive surgery, he sat hunched in a corner of his cage.

Eight days later, experimenters strapped Sam Smith into an MRI machine to look at what they had done to him. The surgeon had unknowingly nicked a blood vessel, and blood was pooling inside his skull—putting dangerous and potentially deadly pressure on his brain. Yet again, he was strapped down and cut open, so that experimenters could remove the buildup of fluid.

Repeatedly, experimenters deprived Sam Smith of food and water for nearly 24 hours in order to force him to perform a task and then “rewarded” him with an entire day’s nourishment—which they only gave him 15 minutes to consume. Ricocheting from ravenously hungry to unpleasantly full in minutes, monkeys subjected to this schoolyard bully’s fantasy, called the “lunch box procedure,” often suffer from bloating and gastrointestinal discomfort.

As the days marched on, Sam Smith sank deeper into depression. He developed a habit of rocking back and forth—a self-soothing behavior also seen in distraught humans. On several occasions, he’s been found injured or bleeding in his cage, hurt by a sharp edge of metal or a monkey in a neighboring cage. He still rips out his own hair.

Tell NIH: This Suffering Must End!

The crushing physical and emotional toll of confinement and repeated experimentation on Sam Smith and his fellow prisoners is apparently no matter to Murray, who has built a career on tormenting them for four decades. While she goes home to lounge in her spacious condo, the monkeys remain—trapped in a state of total impoverishment, denied anything that would make their lives worth living. 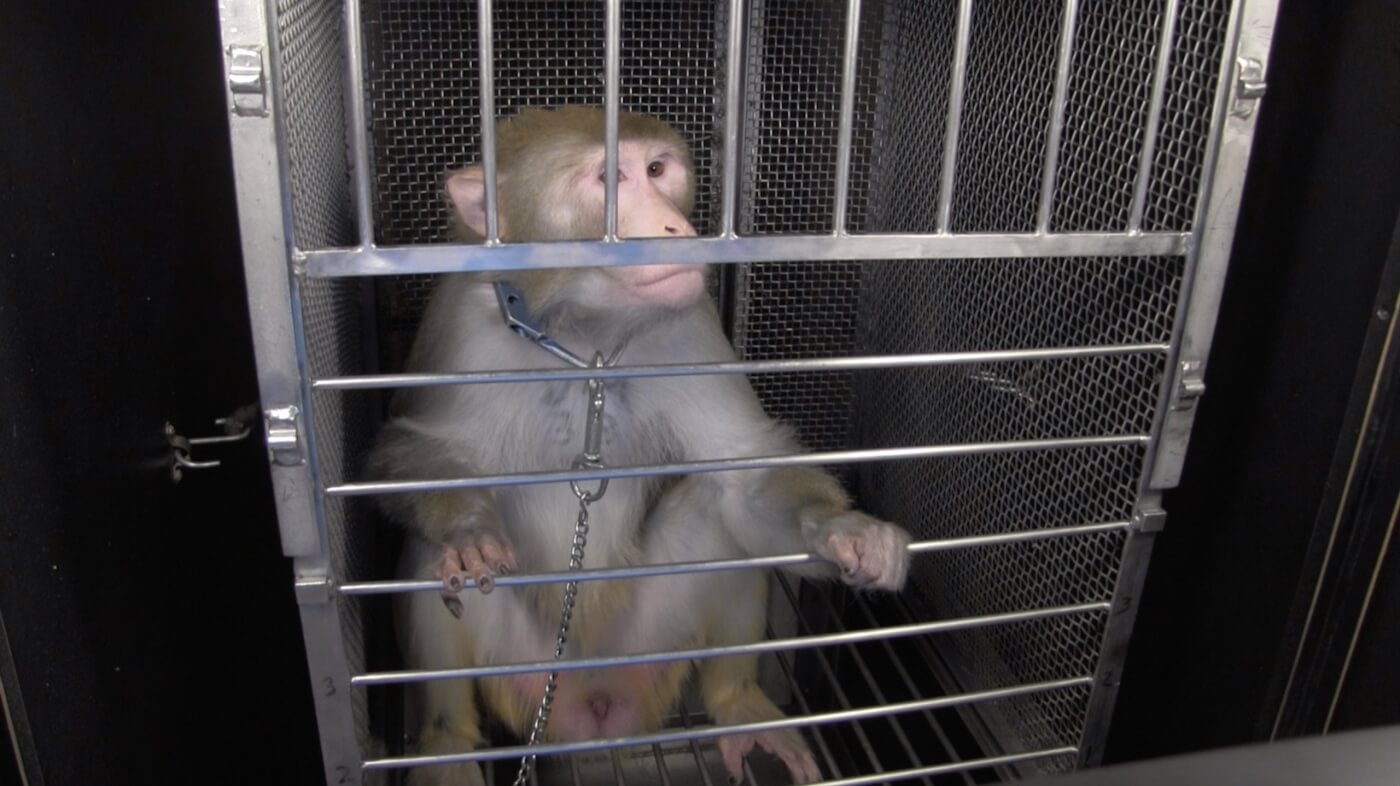 In all its years of operation, Murray’s pain factory hasn’t yielded a single cure or treatment for humans. But as long as NIH keeps pouring money into it, Sam Smith’s story will keep repeating. Demand that the agency pull the plug on this inexcusable cruelty today: