In the desolate laboratory run by experimenter Elisabeth Murray at the National Institutes of Health (NIH) in Bethesda, Maryland, Nick Nack, a 14-year-old rhesus macaque, exists alone in a cold metal cage. He bears the scars—visible and invisible—of more than a decade of trauma.

His fur is patchy where he’s ripped it out again and again—sometimes leaving bald spots on up to 73% of his body. A thick titanium post, cemented in place during one of many painful and invasive surgeries, juts out from his head. Inside the plundered chamber of his skull, parts of his brain have been damaged beyond repair, destroyed by toxic chemical injections.

Macaques should live in vibrant social groups, exploring new territories and foraging for fruits and seeds. But Nick Nack was one of the unlucky ones. From the moment he was born, his fate was sealed: He would spend his life in a cramped steel cage, being abused and exploited in devastating experiments.

Weighing only a pound, the infant who would later be called Nick Nack entered the world on May 2, 2007, at the rural South Carolina breeding facility of notorious monkey dealer Alpha Genesis. Handled with little more care than outgrown clothing chucked on a thrift store donation pile, inmates of this sordid primate prison have died from suffocation, hypothermia, and dehydration. But Nick Nack would be spared that fate—only to be sold to the highest bidder for more torment.

Along with dozens of other monkeys—just a small sampling of the thousands of primates, possibly harboring dangerous pathogens, who are hauled across state lines every year—Nick Nack, by then almost 3 years old, was crammed into a small wooden crate and packed into the back of a truck for the more than 500-mile journey to NIH. There, he’d join the grim decades-long roster of victims of seasoned animal tormenter Elisabeth Murray. 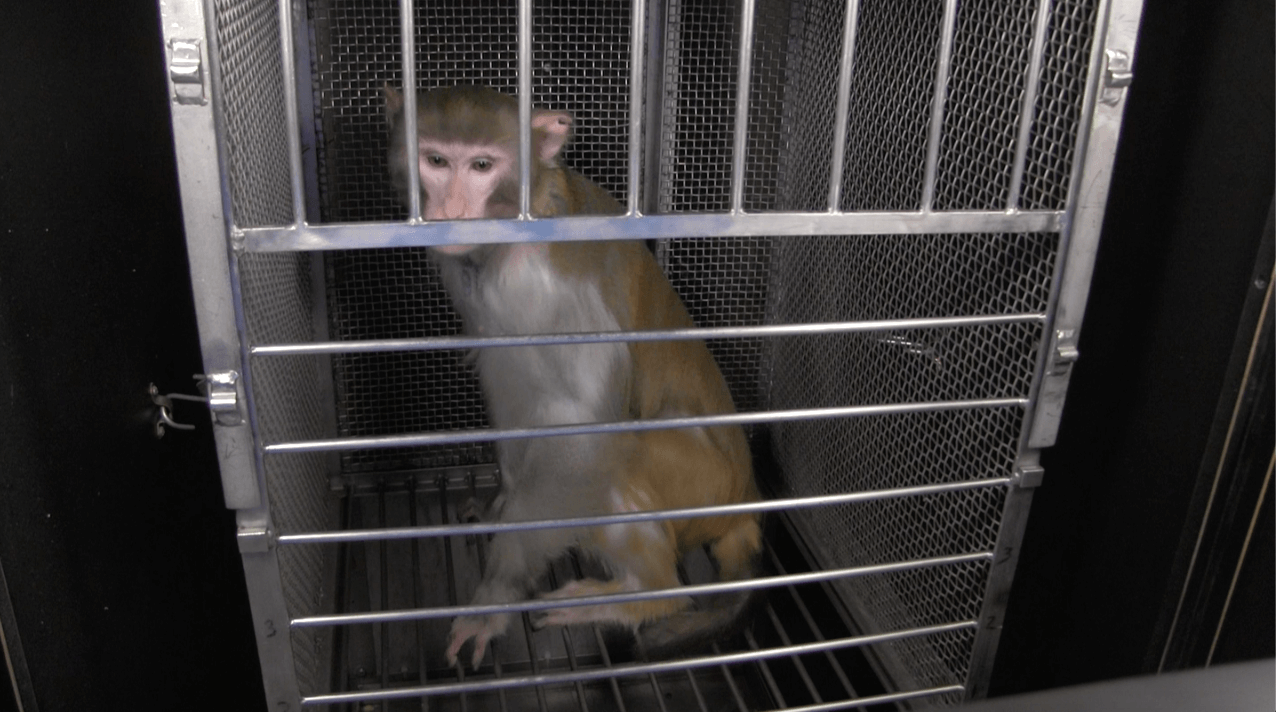 Although rhesus macaques, like humans, quickly crumble psychologically if denied social contact with other members of their species, experimenters locked Nick Nack in a cage all alone. Within weeks, they noticed that the fur on his legs and back had grown thin—a telltale sign that the lonely and distraught monkey had begun to rip out his own hair.

The anguish of being imprisoned alone in a cage barely bigger than one’s body would be enough to destroy anyone’s psyche, but experimenters wanted more: They sawed off a portion of Nick Nack’s skull and injected his brain with toxic acid. Recovery from surgery was excruciating and slow. Nick Nack’s brain swelled, and he suffered from vomiting.

Experimenters seized control of Nick Nack’s body as though he were little more than a wooden marionette that they could manipulate by the strings. They fitted a metal collar around his neck so they could easily hook him with a pole and yank him from his cage. Then they exposed his skull and screwed and glued a titanium headpost to the bone so that they could force him to keep his head stock-still during experiments. When the headpost became loose and infected and oozed with pus, they removed it—only to cut him open and cement it in place again.

Over the months, Nick Nack’s appetite waned. Losing weight, he picked at the biscuits in his cage. He continued to rip out his fur, leaving behind vast patches of pink skin like oceans on a time-worn map of despair. Although it’s been a decade since he was first carted off to Murray’s laboratory, his odyssey of suffering has left him right where he began: anguished and isolated in a desolate steel cage.

Nick Nack’s story, while tragic, is hardly unusual. Hundreds of monkeys, each one an individual with unique thoughts and desires, have withered away in cramped cages in Murray’s laboratory. Dozens, like Nick Nack, are still there right now—their bodies invaded and pillaged for worthless data that hasn’t yielded a treatment for humans in four decades of tests.

This torment of sentient beings is inexcusable—and you can help end it. Click the button below to speak up for Nick Nack and his fellow prisoners of Murray’s laboratory today.