In 2017, a horrifying video of a shark being dragged behind a boat outraged social media users and caught the attention of local law enforcement. A few months later, the three men who filmed the video—Michael Wenzel, Robert Lee Benac, and Spencer Heintz—were charged for their parts in the evil stunt. Two of them—Benac and Wenzel—have since been sentenced to 10 days in jail each as well as probation, according to reports.

Florida man, who was caught on a viral video that showed him dragging a shark behind a boat and shooting it was sentenced to 10 days in jail. https://t.co/60U2M7RzxH

In addition to his 10-day jail sentence, Benac was given 11 months of probation and a $2,500 fine, according to the Tampa Bay Times. He was also reportedly given 250 hours of community service, half of which he must serve at an animal shelter.

New details concerning the cruel stunt have also been released. According to Florida wildlife investigators, the shark was shot before being dragged to death by the men.

A man involved in a viral video showing him laughing and smiling as a shark gets dragged to death behind a high-speed boat in Florida was sentenced to 10 days in jail https://t.co/4DoLZgJghY

We applaud the State Attorney’s Office for the 13th Judicial Circuit and the Florida Fish and Wildlife Conservation Commission for seeking justice for marine wildlife.

Let this be a lesson to all: Leave wild animals in peace.

If you really want to help sharks, observing them from a safe distance is a great start. But did you know that sharks—along with dolphins, whales, and sea turtles—are often unintentionally caught as “bycatch” and that many of them are simply discarded? This means that if you eat fish, you’re contributing to the death of sharks. Luckily, there’s a simple solution: Go vegan!

Three Florida men have been charged in connection with a video of a shark being dragged behind a boat, the Florida Fish and Wildlife Conservation Commission (FWC) and Hillsborough County State Attorney’s Office announced on Tuesday.

Michael Wenzel, Robert Lee Benac, and Spencer Heintz have been charged with two third-degree felony counts of aggravated cruelty to animals. Wenzel and Lee Benac have also been charged with one misdemeanor count of illegal method of take.

FWC Commission Chair Bo Rivard said, “It is our hope these charges will send a clear message to others that this kind of behavior involving our fish and wildlife will not be tolerated.” Andrew H. Warren, state attorney for the 13th Judicial Circuit, called the act “senseless and unjustifiable.” PETA couldn’t agree more, and we applaud the FWC and Hillsborough County State Attorney’s Office for seeking justice for marine wildlife.

A video of a shark being dragged behind a boat has gone viral, gaining attention on social media and from the Florida Fish and Wildlife Conservation Commission (FFWCC).

CAN SOMEONE PLEASE TELL ME WTF IS GOING ON HERE ???? JUST GOT THIS ON MY FEED ! SENT FROM @bearjew428 AND @MICHAELWENZEL .FOR ONCE I MAY HAVE TO AGREE WITH @PETA. #WHODOESTHISSHIT #sowrong #notcool

The video was shared on Instagram by Mark Quartiano—@marktheshark—on Tuesday. According to The New York Times, Quartiano received the video on Monday via direct message. Although he’s a self-proclaimed “shark hunter,” even he found the footage horrifying, writing, “FOR ONCE I MAY HAVE TO AGREE WITH @PETA. #WHODOESTHISSHIT #sowrong #notcool,” in his caption.

For once, I may have to agree with PETA, someone said on Instagram. https://t.co/1cXXOjmNUx

In a depressingly ironic twist, the video was shared during Discovery Channel’s Shark Week, which—in part—aims to educate viewers about these remarkable fish and promote shark conservation.

Sharks are sensitive animals, and being impaled by a fishing hook and dragged across the rough sea, hitting each wave with violent force, was undoubtedly an agonizing and terrifying experience. Those who purposely torment animals have psychological issues that, unless addressed, will lead them to continue in their trajectory of violence, committing cruel acts against others who can’t defend themselves and becoming a threat to their community. The FFWCC is investigating the incident and has reportedly identified the people in the video.

Unfortunately, this is not the first time that humans have abused sharks in an attempt to gain social media fame. Earlier this month, an upsetting video showing a group of young people terrorizing a juvenile shark was uploaded to Instagram. The footage shows a young man diving on top of a small shark and wrestling the animal from the water and onto a nearby dock. The shark—disoriented and traumatized by the attack—visibly struggles on the dock as a crowd of young people laugh, cheer, and film the animal’s suffering.

This little shark started to suffocate the moment that he or she was hauled out of the water. Instead of bullying wild animals, the people on that dock should have been wrestling with their consciences and should have chosen to leave this shark in peace—rather than abusing him or her for a cheap laugh and an Instagram video.

Animals aren’t selfie props. If there’s any risk that your photo or video is going to hurt or cause stress to an animal, it’s not worth it. Safely observe wildlife from a distance. Participate in activities on the water—like swimming or kayaking—that don’t contribute to animal suffering. 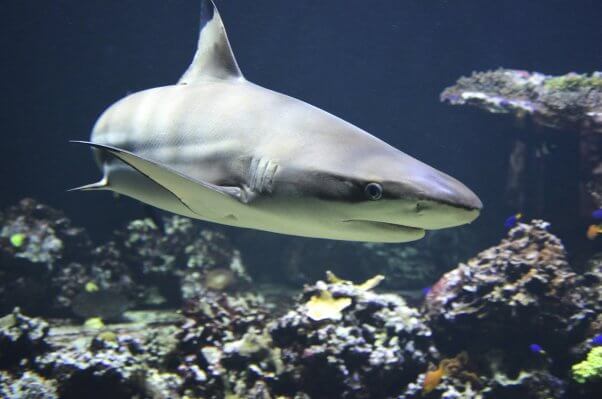 You can help us battle this shocking trend of ignorance and violence by sharing this story with your friends, family members, and social media followers. Click the button below to let them know that animals’ lives are worth so much more than Instagram “likes.”