After PETA filed multiple complaints with the U.S. Department of Agriculture (USDA) regarding egregious violations of the Animal Welfare Act (AWA) at Chief Saunooke Bear Park, the bear pit must now surrender its exhibitor license. What’s more, the license will remain suspended until the dismal facility is able to prove that it’s compliant with AWA regulations—if it ever can.

Members of the Eastern Band of Cherokee Indians joined PETA in meeting with the USDA to detail the problems at the Cherokee, North Carolina, roadside zoo. Following our complaints and meeting, the USDA charged the bear pit with more than a dozen violations. Now, the park has agreed to pay a fine and surrender its license in order to settle the case. It’s probably a smart move, considering that in a 62-page report that PETA gave to the USDA, bear experts who visited the facility documented that, among other violations, the park was failing to maintain adequate barriers between bears and the public, leading to at least two attacks on visitors thus far. According to the experts, the park also failed to supply food for its public feedings that met the bears’ nutritional needs and instead allowed visitors to feed them cat food and Lucky Charms cereal. Among many other abuses, the facility also failed to provide the bears with veterinary care and forced them to eat from filthy, unsanitary food containers. 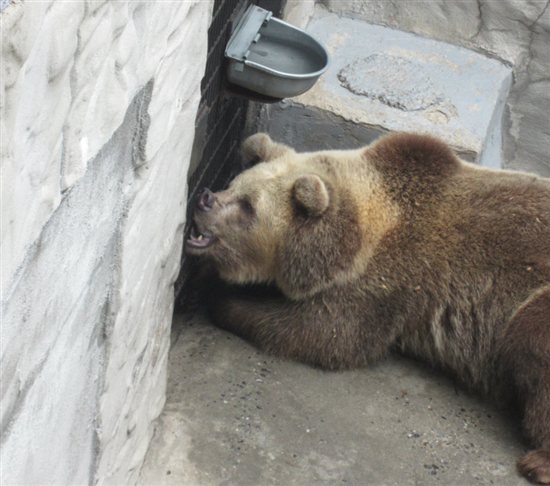 Barely a month ago, a PETA investigation revealed that staff members were deliberately depriving bears of food and that the animals are so stressed from being constantly confined to small, concrete pits that they pace repeatedly and gnaw at the metal cage bars. Our investigation also uncovered drug use, racism, wage-law violations, and more.

Please ask the USDA to take the next step and confiscate the abused bears.