PETA knows that living vegan is a major step toward tackling climate change, and we want U.S. Rep. Alexandria Ocasio-Cortez and other Green New Deal supporters to know it, too. To help representatives combat environmental destruction, we gave out vegan cookbooks at over 100 congressional offices in Washington, D.C. 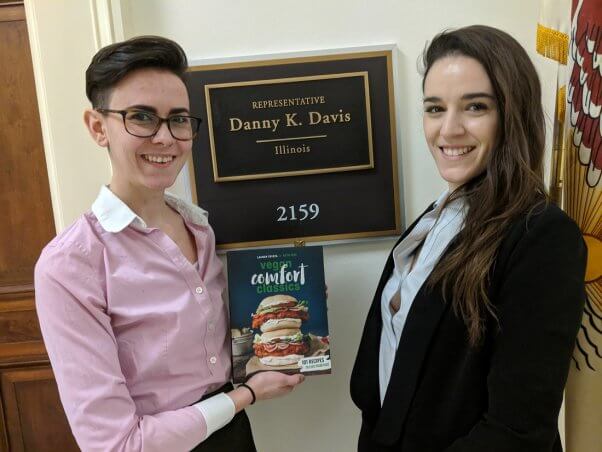 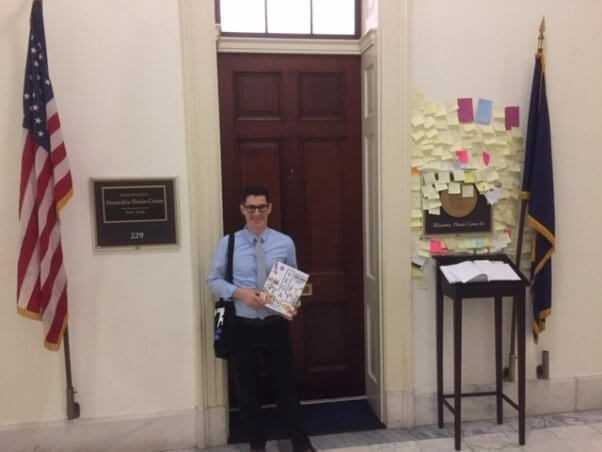 A PETA activist drops off a vegan cookbook at the office of Rep. Alexandria Ocasio-Cortez (D-N.Y.).]

People at the offices were excited to receive the cookbooks! We hope our small gesture will lead these representatives and their staff members to make changes that save animals and the planet.

Continue reading to find out why vegan food policies must be included in the Green New Deal.

The political world is buzzing about the Green New Deal. As climate change breathes down our necks and with outrageous health-care costs and a sluggish economy, our only hope is to take immediate action—but unless that action includes going vegan, it’s not going to be enough.

PETA is urging the Green New Deal’s most staunch supporter, Rep. Alexandria Ocasio-Cortez (who has already expressed her love for drinking oat milk and snacking on bananas with peanut butter), to help counter the environmental devastation of animal agriculture. To do this, the Green New Deal should include vegan food policies, such as a program for making the transition from meat, egg, and dairy farming to plant-based agriculture.

Animal agriculture is devastating to animals, but it also poisons the environment and makes Americans sick. What we need is a Vegan Green New Deal.

Let’s face facts: If we want a planet that’s healthy enough to continue sustaining life, we must stop eating animals—period. The science couldn’t be clearer. The Food and Agriculture Organization of the United Nations estimates that animal agriculture is responsible for as much as 18 percent of greenhouse-gas emissions worldwide. To put that in context, producing just over 2 pounds of beef results in more greenhouse-gas emissions than driving a car for three hours.

A University of Oxford study concluded that individuals who switch to healthy, eco-friendly vegan foods can reduce their carbon footprint from food by up to 73 percent. It’s estimated that if people in the U.S. simply opted to eat beans instead of beef, we’d be more than halfway to the greenhouse-gas reduction goals set by the Obama administration.

On top of climate change, we all know the U.S. is facing a health crisis as well. Meat, egg, and dairy consumption are linked to cardiovascular disease, diabetes, and cancer in addition to other top killers. But animal-agriculture industry lobbyists seem to sit at the top of the food chain, spending millions of dollars to keep meat, eggs, and dairy at the center of American food and agricultural policies.

If proponents of the Green New Deal want to promote justice, equality, and economic security, they should make dismantling the meat, egg, and dairy industries a top priority.

Filthy farms that raise animals pollute the air, water, and soil—and as anyone can imagine, they aren’t located in affluent Connecticut suburbs. These environmental nightmares are typically built in or near low-income communities. When farmers allow their toxic cesspools of waste and rotting animal parts to contaminate the land—or when they spray excess feces and urine into the air—it’s rural communities (and often communities of color) that suffer.

Pig farms spray toxic pig waste into nearby neighborhoods. How communities of color in #NC are fighting back: https://t.co/LsYV5Wo3gR pic.twitter.com/5K4uYzAvf5

Instead of making people sick with the same old animal-derived foods, promoting vegan initiatives could help create new jobs and prompt innovation. A program that incentivizes making a transition from meat, egg, and dairy farming to plant-based agriculture would help workers stay employed while simultaneously encouraging healthful eating and the development of sustainable, green industry.

PETA hopes Ocasio-Cortez and the rest of our representatives will promote equality, environmental justice, health, and kindness by recognizing the need for vegan food policies. But regardless of Congress’ action or inaction, you can easily reduce your contribution to climate change by going vegan today. Go even further by persuading a friend or loved one to do the same!

Need help getting started? We’ve got you covered:

Note: PETA supports animal rights, opposes all forms of animal exploitation, and provides the public with information on these issues. PETA does not directly or indirectly participate or intervene in any political campaign on behalf of or in opposition to any candidate for public office or any political party.