There are endless reasons to go vegan. From being healthy to saving animals and the planet, eating plant-based meals has countless benefits. However, if you’re not quite convinced, after watching these videos, you might be singing a new vegan tune. These diners got quite the shock when they encountered live bugs crawling out of the dead flesh they intended to consume.

This fried chicken was literally crawling with maggots:

I swear to God I’m done with fried chicken shops

And it’s not only chicken. You may be horrified to find other living beings (maggots again!) in your oysters:

Thinking of switching from eating salmon to eating delicious Gardein Golden Fishless Filets? We might just have the video to convince you that not only would that be the compassionate choice but also it would save you a lot of, well, general ick:

There are dozens of these videos online, and while each is equally disturbing, they pale in comparison to what the meat and dairy industry do to the animals that become the dead hosts to these crawly beings. Chickens in the meat industry are crammed by the thousands into typically windowless sheds, and hot blades are used to cut off large chunks of their sensitive beaks so that they won’t peck each other out of frustration. Chickens are also genetically manipulated and regularly dosed with drugs to make them grow faster and larger, and they may become crippled under their own weight. 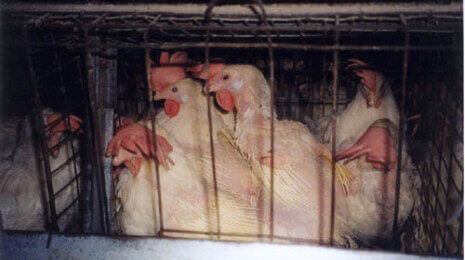 Fish fare no better in the meat industry. Without any legal protection from cruel treatment, these intelligent, complex animals are impaled, crushed, suffocated, or cut open before being gutted, all while they’re conscious.

So although the maggots may make your stomach turn, that’s really just the tip of the iceberg of a truly disgusting and abusive industry. Worse than the wormy videos? This video about how animals are treated in slaughterhouses:

If you want to avoid surprise “guests” in your dishes and hurting animals, pledge to go vegan today and stay away from gross dishes and a gross industry.