Team PETA does it again! After losing last year by a scant half a point, PETA has reclaimed the crown in the Sixth Annual GlobalBee International Quiz trivia challenge sponsored by the Sister Cities of Newport News. Team PETA blew away the competition—which consisted of a field of 16 teams representing Hampton Roads–area colleges, high schools, civic groups, and other organizations—besting the second-place team by a comfortable margin of 13 points. 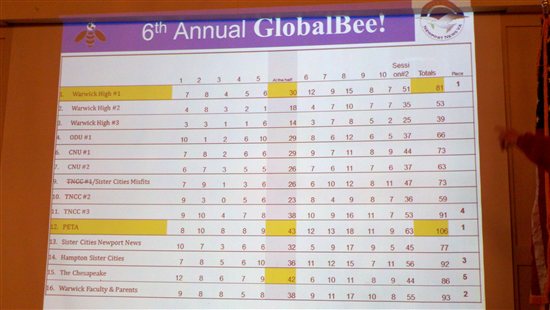 Team PETA members Emily Bowling, Chris Holbein, Hannah Schein, and Lauren Stroyeck aced the diverse topics, which included geography, cultural traditions, current affairs, and science. The team walked away with a handsome trophy, which will be engraved with Team PETA’s name and kept proudly for a year.

Holbein attributes the team’s success to its members’ self-described status as news junkies but also gives a nod to their healthy vegan diets, which he says helps keep their arteries clear and their wits razor sharp.

Are vegetarians really smarter? According to a 2012 analysis of nine studies, eating lots of vegetables is associated with a lower risk of dementia and age-related cognitive decline. And a study by Southampton University linked a high IQ with being vegetarian after finding that schoolchildren who tested high on IQ tests were more likely to become vegetarian later in life.

Want to protect your health, animals, and the environment all at the same time? It’s a no-brainer—go vegan.