Annapurna Interactive—publisher of the viral video game Stray—has won PETA’s 2022 Company of the Year award. The game broke records on Twitch, inspired countless animal shelter fundraisers, and showed thousands of players that the “great outdoors” is a perilous place for cats. It was released to overwhelmingly pawsitive reviews, won PlayStation Game of the Year at the Golden Joystick Awards 2022, and won Best Indie at The Game Awards 2022. It was also a Game of the Year nominee at the Game Awards, alongside Elden Ring and God of War Ragnarök. 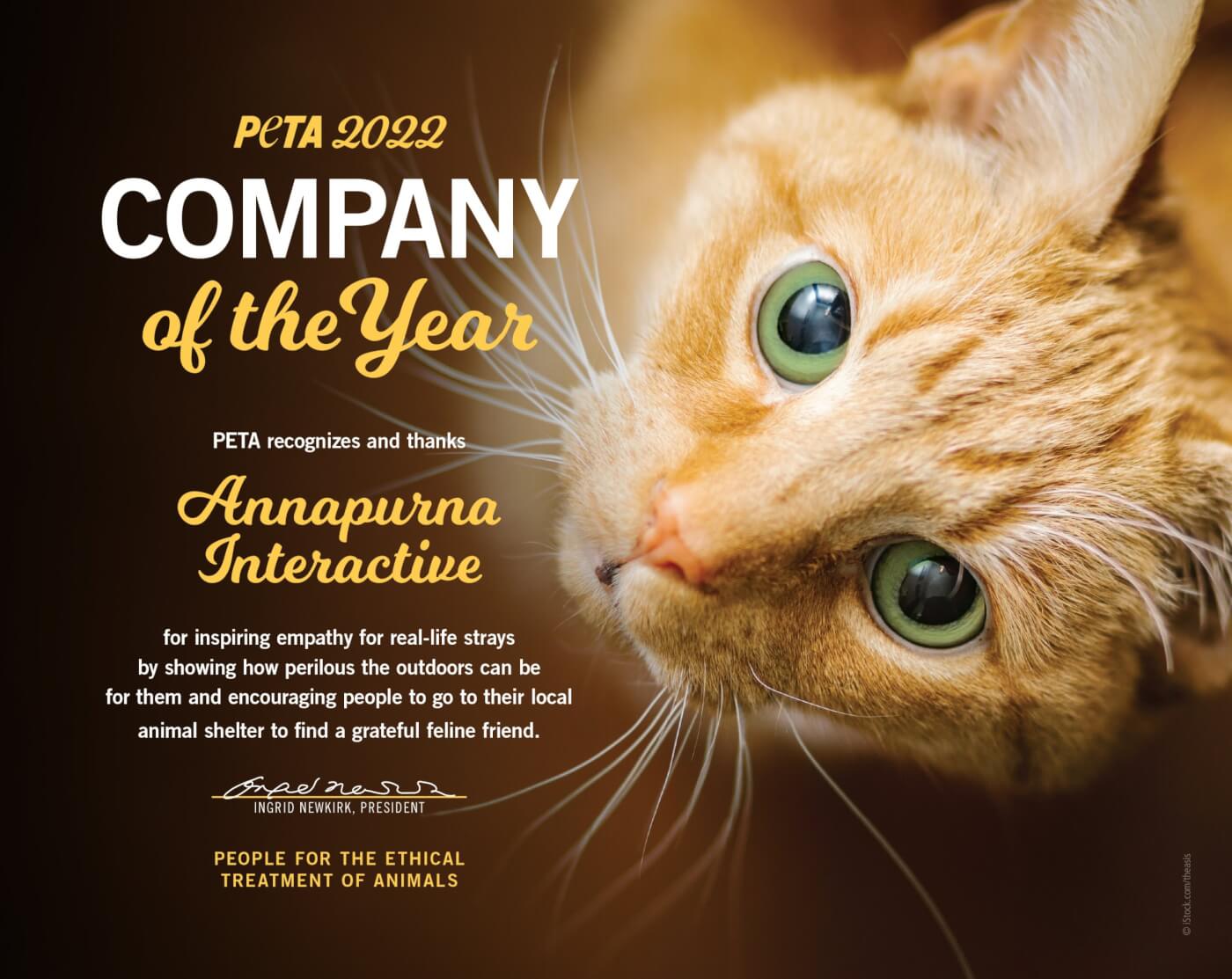 Earlier this year, PETA France awarded Stray’s developer, BlueTwelve Studio, a Prix des Champions des Chats for its work on the game. The “small team from the south of France mostly made up of cats and a handful of humans” was inspired by Murtaugh (a stray cat who was rescued from under a car) and the family who rescued and adopted him. Both BlueTwelve Studio and Annapurna Interactive get two paws up from PETA for the compassion Stray inspired in a generation of gamers.

Stray follows an orange cat—whose appearance and movements were based on the designers’ own feline companions—as he journeys through a post-apocalyptic landscape to find his way home. Along the way, the purrtagonist battles some of the same threats faced by real cats who are left outside, including disease and attacks from predators. The game allows players to channel their inner cat, smashing speciesism by allowing humans to walk a mile in someone else’s shoes—or, in this case, on four feline legs.

At its July release, Stray drew more than 62,000 players concurrently on Steam, became the most-downloaded game in the U.S. on PlayStation 4 and PlayStation 5, and attracted more than 285,000 Twitch stream viewers. Annapurna Interactive’s marketing director said he hoped Stray would raise awareness of the importance of adopting companion animals rather than buying them. The company didn’t stop there: Annapurna Interactive, as well as streamers and members of the online community, facilitated numerous events and giveaways to raise funds for multiple cat-related charities.

Around 70 million cats and dogs are homeless in the U.S. at any given time. Animal shelters with “no-kill” policies turn dogs away when they inevitably reach capacity and often refuse to accept cats altogether, leaving the most vulnerable animals with nowhere to go.

Like Stray’s hero, many cats end up abandoned on the streets, where they risk being hit by cars, infected with diseases, or hurt by cruel people—and those who reproduce make the companion animal overpopulation crisis worse. That’s why PETA urges shelters to accept all animals in need, asks everyone to adopt animals instead of buying them, and advises guardians to have their animal companions spayed or neutered.

Past winners of PETA’s Company of the Year award include Good Catch, Support + Feed, Save the Duck, WeWork, Netflix, Beyond Meat, Ogilvy & Mather Advertising Bangkok, Daiya, and Emulate.