Ever wonder what persuaded self-described “professional idiot” Steve-O to adopt a vegan diet? Believe it or not, it was a religious experience.

“I heard a Krishna Consciousness guy in a YouTube video ask ‘How can you expect to be saved if you eat meat?’ I became terrified of having to ‘answer’ for all of the suffering that I was causing for animals and immediately stopped eating meat …,” wrote the sexiest vegetarian finalist Steve-O in a recent posting on his blog.

A few weeks later, with the help of his friend, Johnny Knoxville, Steve-O kicked his drug habit and started to realize how much better he was feeling. Gradually, he stopped eating eggs and fish, and finally he bought what he calls an “experimental carton of soy milk,” which convinced him to abandon all animal products.

Since then, Steve-O has put his money where his mouth is, speaking out in defense of frogs who are killed for classroom dissections, lonely elephants in zoos and circuses, and animals who are killed for their fur. He even walked out of a diabetes fundraiser when he learned that meat was on the menu. 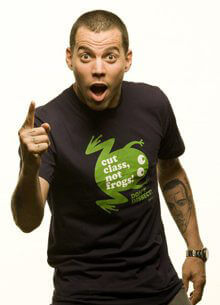 I got into being vegan because I was simply looking to benefit from being more compassionate. I have since come to learn that it is an animal-based diet that is responsible for the overwhelming majority of cases of cancer, heart disease, diabetes, obesity, multiple sclerosis, and all kinds of other problems.

Wanna be like Steve-O? Do try this at home: Order a vegetarian/vegan starter kit and get started eating like a jackass.