It’s a bird, it’s a plane, it’s … Steve-O! The vegan comedian and daredevil led a PETA protest outside the Edmonton Valley Zoo to call on zoo officials to allow Lucy, the ailing and lonely elephant at the zoo, to retire to an elephant sanctuary. “I’m sympathetic to Lucy because I know that elephants in their natural habitat will walk some 30 miles every day,” Steve-O says. “I don’t understand how the zoo’s able to keep her. It seems so black and white.” 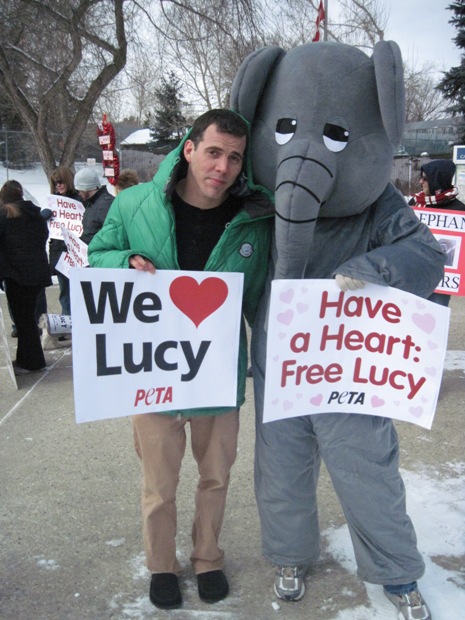 As Steve-O notes, elephants need to walk around and move freely. Edmonton’s frigid winters mean that Lucy spends months on end inside a barn. Is it any wonder she’s suffering from arthritis, chronic foot problems, and an undiagnosed respiratory ailment?  Lucy—who has been in the zoo for more than 30 years—is depressed and needs the company of other elephants and room to move around.

You can help by joining Steve-O, Bob Barker, William Shatner,  and NHL veteran Georges Laraque in appealing to zoo officials  to allow Lucy to retire to a sanctuary.