If you always have a sleepless night after watching a horror movie, you might want to think twice before sitting down to a meal of dead bodies. Here’s why meat is more dangerous than an ax-wielding maniac: 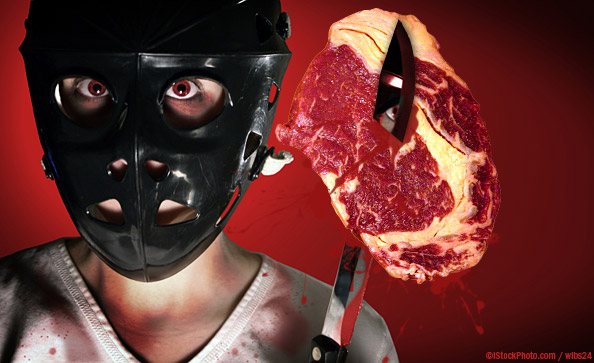 There’s something deadly in the water.

If you’re still eating fish despite the dangers of mercury, might I suggest that you may also enjoy a summer job at Camp Crystal Lake?

The hormones will get you every time

As every randy teenage slasher-flick victim can attest, hormones can be deadly. Hormones in meat can cause all sorts of unsexy conditions, such as “moobs.” Which leads me to number three …

Which would you rather have a standoff with?

Eating meat causes impotence. Given their druthers, I think a lot of men would opt instead for the hockey mask–wearing serial killer.

The chubby guy always gets it.

That’s another good reason not to ingest all the saturated fat that meat contains.

It’s getting hard to breathe.

Find yourself short of breath when you hear that ominous theme music (“Ki-ki-ki-ma-ma-ma”)? The toxic gasses and bacteria that wind spreads from factory farms make it even more difficult to inhale.

Stay out of the woods.

Do you ever shout, “Why are you running into the woods?!” when some moron is being chased by a psycho? People in real life do dumb things that lead to their untimely demise, too, like eating meat, eggs, and dairy products even though bad diets are to blame for one-third of all cancer deaths.

Farms are generally good to avoid, too.

Have you seen PETA’s slasher movie that features video footage from chicken farms? If you’re too chicken … don’t eat chicken.

A knife isn’t the only thing that will stop a heart.

Heart disease caused by diets high in artery-clogging animal products will do the trick, too.

What kills a killer?

In Friday the 13th Part VIII: Jason Takes Manhattan, Voorhees is finally done in by toxic waste in the sewers. If the kids had only gotten him into one of the waterways polluted with factory-farm runoff, he would’ve been a goner a lot sooner.

The killer always comes back to life.

Meat’s got its own resilient killer: antibiotic-resistant bacteria caused by the overuse of antibiotics on factory farms.

Between meat and dairy products, trying to choose which is more deadly is like trying to decide which serial killer you want to take a weekend getaway with.

Maybe the worst thing about how deadly meat is, is that we actually have to pay for it—both at the check-out counter and in the form of government subsidies. I mean, at least when Jason is swinging a machete, he’s not simultaneously asking for your wallet—am I right?

Slash your risk of getting killed off early by running from meat as if your life depended on it. (But don’t go running through the woods. That’s never a good idea.)