In November, while traveling from Romania to Saudi Arabia, a ship known as the Queen Hind capsized in the Black Sea. The live-export ship was initially believed to have been transporting 14,600 sheep—only 180 survived the disaster, meaning that roughly 14,420 were believed to have been killed, most of them by drowning. But new revelations indicate that the number was likely much, much higher: Following a rescue mission, secret decks housing many more sheep were apparently discovered aboard the vessel, adding merit to the initial belief that the ship sank because it was overloaded.

According to reports, the discovery will likely increase the death count by several thousand—all the sheep held in the secret decks almost surely died when the ship sank.

These additional deaths are just further proof of what PETA has been saying all along: There is simply no viable justification for live export.

This isn’t the first time thousands of sheep have endured nightmarish deaths at sea—and unless the practice of live export ends, it won’t be the last. Keep reading to discover what live export is, why it’s cruel, and what you can do to help sheep.

Reminder: Animals go through hell before they even arrive at the slaughterhouse. Many don’t ever make it and endure equally heinous deaths during transport. Case in point: the more than 14,000 sheep who drowned in the Black Sea on November 24 after a live-export ship traveling from Romania to Saudi Arabia capsized.

A ship carrying almost 15,000 sheep overturned in the Black Sea near Romania, setting off a desperate effort to rescue the animals. The ship’s crew were all rescued. https://t.co/maMS7NQpf8

Although there was a rescue operation, only 32 of the sheep were reportedly saved.

Animal rescuers battle desperately to save surviving sheep on ship https://t.co/j6VsIBw8Yl via @MailOnline

All 20 crew members were rescued, according to reports.

Initial investigations reportedly suggest that the “death ship” was overloaded—unsurprising, considering we’re talking about the live-export trade, which treats animals as commodities rather than the living, feeling individuals that they are.

These sheep—who were packed onto a ship like pieces of luggage—must have been terrified as they were weighed down in the water by their thick fleece.

Bred in Romania (where about 70,000 sheep are exported every year) and packed onto a ship to face their deaths in the Middle East, these sheep were doomed from the start. Even if they hadn’t drowned, many would have starved to death, been trampled, or become ill and died during the trip to Saudi Arabia. Upon arrival, those who survived the hellish journey likely would have been kicked, beaten, prodded, and dragged off trucks and into slaughterhouses by their ears and legs. Eventually, most would have had their throats cut while they were still conscious, as halal slaughter standards dictate. Some of them may have been slaughtered en masse in lots, whereas others might have been taken away and slaughtered individually by purchasers. 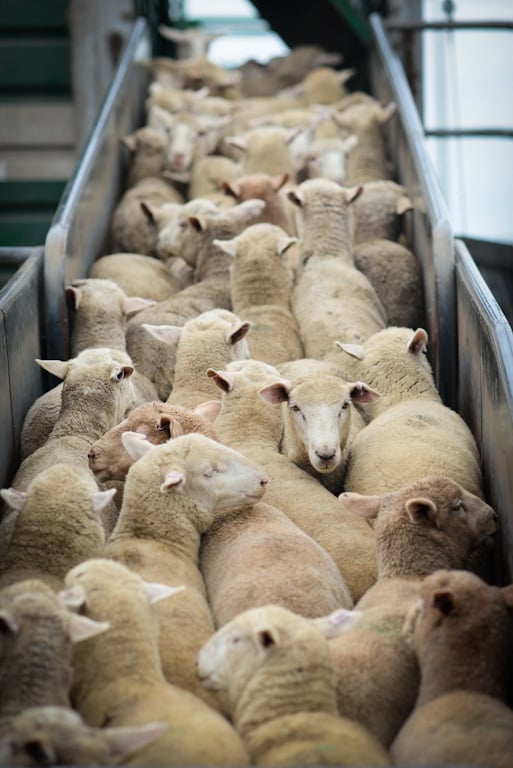 This is hardly the first live-export tragedy to occur. Just last year, roughly 2,400 sheep died—mostly from heat stress—while being shipped from Australia to the Middle East. In 2012, 22,000 sick sheep suffered horrifically aboard two live-export ships—again, heading from Australia to the Middle East—after they were turned away in Bahrain and forced to endure an additional 14 days at sea.

This most recent catastrophe is the umpteenth time thousands of animals have endured nightmarish deaths at sea—and unless live exports end, it won’t be the last.

Every year, approximately 3 million sheep are exported from Australia—many cast off from the wool industry—to the Middle East and North Africa, where they’re slaughtered for meat. Together, our actions can help end this cruel trade. Click below to urge the Australian minister for agriculture to end the live export of animals:

If you’re concerned about the welfare of sheep, there’s only one option: Leave lambs and sheep off your plate …

… and their skin and fleece off your back.

Have a Heart: Pledge Not to Wear Wool!