PETA has sent an urgent letter to Australian Prime Minister Julia Gillard asking her to put a stop to cruel live exports after tens of thousands of sick sheep shipped from Australia to slaughter in the Middle East were left stranded aboard their vessels, struggling to survive in sweltering weather after being turned away by officials in Bahrain and Kuwait. One ship remained in the waters off Bahrain for more than a month before reportedly unloading the animals in Pakistan for sale to an unidentified buyer. 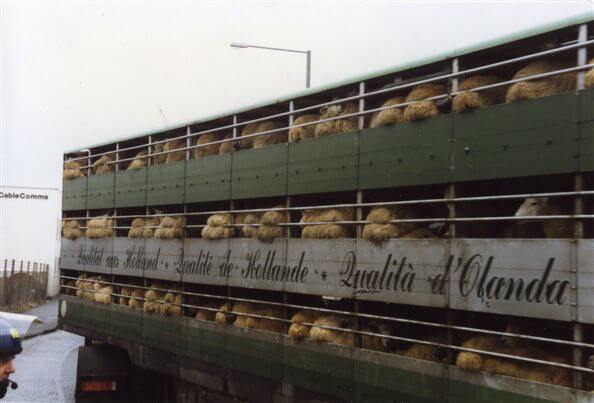 © Compassion in World Farming
From the moment their journey begins, sheep are kept in miserable conditions.

Many people and companies have joined PETA’s boycott of Aussie wool after learning about the cruelty of mulesing, a procedure in which young lambs have huge chunks of skin and flesh cut from their backsides, often without being given any painkillers. But there’s another important reason to shed wool: Every year, around 3 million discarded sheep are packed onto ships to face their deaths in North Africa or the Middle East so that the wool industry can make even more money off the animals.

Many of the sheep starve to death, are trampled, or become ill and die en route to their final destinations. The grueling journey can last several weeks through all weather extremes, with sheep confined amid their own waste on ships that hold up to 100,000 animals. Conditions are hot and cramped—the perfect environment to spread diseases, such as the outbreaks of scabby mouth that caused these two ships to be turned away. 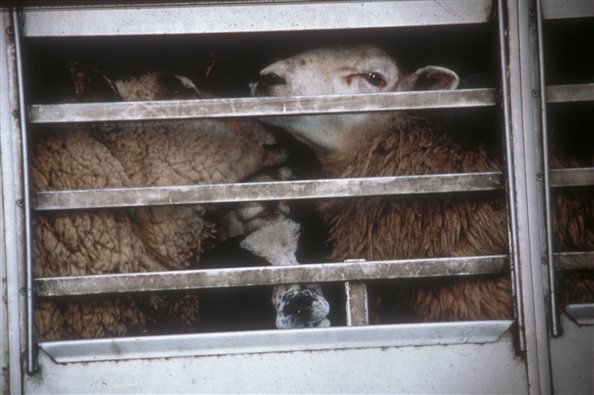 © Compassion in World Farming
The sheep are crammed together so tightly, many are unable to reach food and water troughs.

Sheep who survive the journey are subjected to handling and slaughter methods upon their arrival that would be illegal back in Australia. The animals are kicked, beaten, prodded, and dragged off trucks and into slaughterhouses by their ears and legs, and some are left to die in barren feedlots in scorching–hot temperatures. Sheep have their legs tightly bound and are thrown into the trunks of cars, have their throats slit while they are still conscious, and are left to bleed to death in prolonged and agonizing ways.

These are not the first cases in which sheep have been nightmarishly stranded—and unless live exports end, they won’t be the last. Wool sales support this heartless and bloody industry, so save a sheep—don’t buy wool products. Urge Australian Minister for Agriculture Joe Ludwig to end the live export of animals.