The animals have lost a true ally and a sharp and honest tongue with the passing of PETA Honorary Director and entertainment giant Sam Simon, who was our dear friend, a stalwart champion of animal rights, and the multiple Emmy Award–winning co-creator of The Simpsons and one of the writing geniuses behind hit shows like Taxi, Barney Miller, Cheers, The Tracey Ullman Show, The Drew Carey Show, and the FX series Anger Management.

Simon said that the last two years of his life, in which he worked with PETA to close bear pits, rescue an abused elephant in India, send lone roadside zoo chimpanzees to a sanctuary, and find homes for hundreds of chinchillas, a camel, and even a “gay” bull, were the happiest of his life. Late last week, he was given the news that Ringling Bros., the circus he protested in person, had decided, in light of changed public opinion, to take performing elephants off the road by 2018. He wanted to live to see SeaWorld closed but believed that the day the elephants were out of the circus meant that, too, would happen. 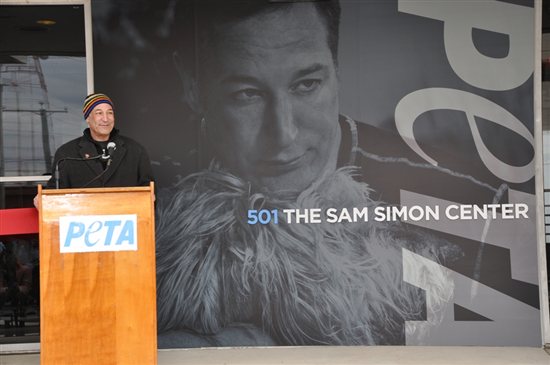 Simon—after whom PETA’s Norfolk, Virginia, headquarters, the Sam Simon Center, is named—had been a vegetarian since he was 19 and a vegan since joining PETA about 15 years ago. He set up a charity, The Sam Simon Foundation, to provide homeless people with vegan meals and to rescue dogs from shelters and train them to assist both the deaf and war veterans with physical and mental trauma.

He attacked animal homelessness at its roots by sponsoring spay and neuter surgeries in low-income areas of Los Angeles, helped PETA launch a mobile spay-and-neuter clinic in Norfolk, Virginia, and hosted numerous PETA fundraising parties at his home in L.A. He also hosted a weekly Internet radio show on Radioio.com in which he always made a point to address the animal rights issues of the moment. 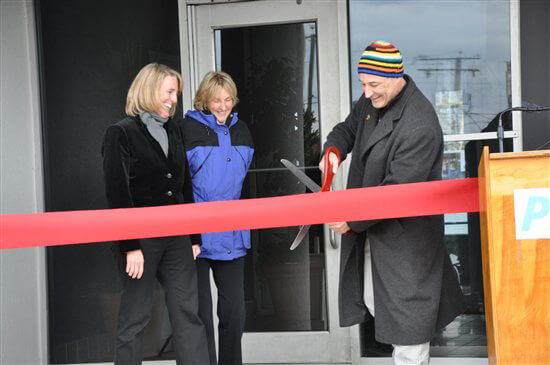 Simon once attended a PETA news conference with Bob Barker  to call attention to the plight of animals on TV and movie sets. “[I]f you can’t afford the CGI [computer-generated imagery], either do a rewrite,” he said, “or do a cartoon show like I did.”

Simon began his close relationship with PETA when he donated his fee for an episode of The Drew Carey Show because the plot involved greyhound racing and he felt that he could not in good conscience keep the money.

After being diagnosed with terminal cancer, Simon asked PETA’s president to come to the hospital to see him and draw up a list, which she did, of ways in which he could help animals before he died. Sam’s list became a guide for his philanthropy in the final part of his life. He paid for transport and even purchased dozens of animals who had lived miserable lives in roadside zoos so that PETA could send them to sanctuaries. “I just wanted to have some days where I get to see animals walk in grass for the first time,” he said. “Through PETA, we rescue animals in roadside zoos and circuses. They are some of the most abused animals in the country.” 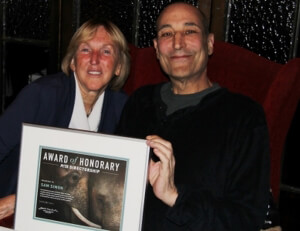 Despite being gravely ill, he traveled to Newfoundland with PETA and Pamela Anderson with a check for $1 million that he offered to pay the Canadian Sealers Association as a bonus if the organization would help facilitate an end to Canada’s annual seal slaughter.

In addition to all the animals Simon saved during his lifetime, he left generous endowments in his will to ensure that his efforts for animals would continue after he was gone. Animals will have reason to be grateful to this smart, funny, passionate activist and philanthropist for years to come.

In dedicating the Sam Simon Center, Sam said, “One day, people will realize that Sam Simon knew that what PETA says is right, ‘Animals are not ours to eat, wear, experiment on, or use in entertainment.'”

PETA president Ingrid Newkirk said, “The world could learn all about kindness from Sam’s example, just the things he said, and I hope everyone who hears about him will do something kind and generous in his honor, even give your dog an extra hour in the park or eat one meal that does not involve animal suffering.” 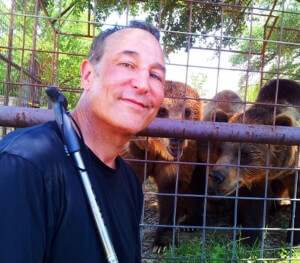