Richard Adams’ classic novel Watership Down, about a rabbit family’s struggles to survive in the face of adversity and threats from cruel humans, undoubtedly inspired countless children to become animal rights activists—but that was just a small part of his efforts to raise awareness about the plight of animals.

Adams, who passed away on Christmas Eve, was a lifelong defender of animal rights, dating back to his own childhood, when he saw a man pushing a cart loaded with dead rabbits down a street. “It made me realise, in an instant, that rabbits were [viewed as] things and that it was only in a baby’s world that they were not,” he said.

He was among the first people to speak out against the annual Canadian seal slaughter, taking part in an anti-hunt lecture tour in Canada in 1977, and was an ardent foe of the fur industry in general, calling it “a major evil for the Western world.” He explained, “When you meditate upon what [animals] suffer, it is enough to drive you mad. It does not bear thinking about.” 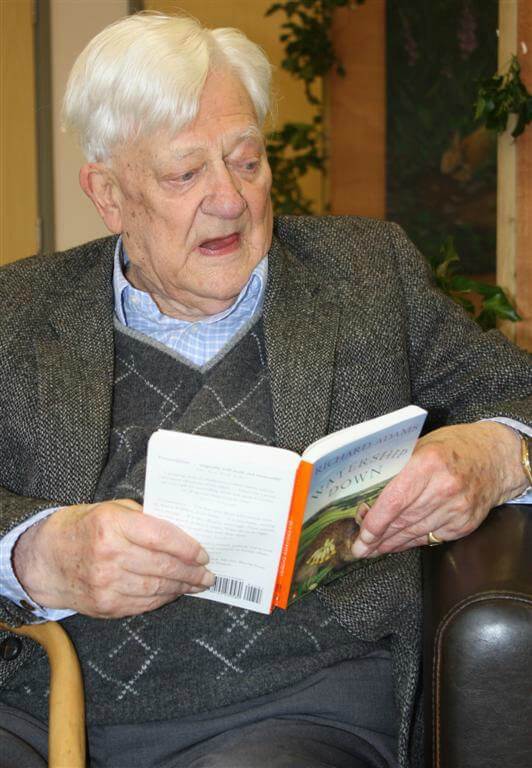 Adams served as president of the U.K.’s Royal Society for the Prevention of Cruelty to Animals for a short time in the ’80s before resigning in protest because he felt that the organization wasn’t focusing enough on campaigning for animal protection.

His best-selling novel The Plague Dogs took an unblinking look at the questionable ethics of animal experimentation. The book, which describes experiments on dogs in heartbreaking detail, “was deliberately set up to satirize animal experimentation as well as government and tabloid press,” he said, admitting that he made no effort to disguise his indignation over the torture of animals in laboratories.

“These experimental animals are just sentient objects; they’re useful because they are able to react; sometimes precisely because they are able to feel fear and pain,” he wrote. “And they’re used as if they were electric light bulbs or boots. What it comes down to is that whereas there used to be human and animal slaves, now there are just animal slaves. They have no legal rights, and no choice in the matter.”

In 2011, Adams joined a number of politicians, scientists, and celebrities—including Jane Goodall, Ricky Gervais, and Queen guitarist Brian May—in urging then–Prime Minister David Cameron to halt the importation of wild-caught primates and their offspring for abuse in experiments, citing the immense suffering that the animals endure.

“It’s time people started thinking of Man as one of a number of species inhabiting the planet; and if he’s the cleverest, that merely gives him more responsibility for seeing that the rest can lead proper, natural lives,” Adams wrote in The Plague Dogs.

We can all honor Adams’ memory by taking responsibility for our actions and choosing kindness over cruelty whenever and wherever we can. We can choose to withhold support from charities that fund experiments on animals, we can choose faux fur and vegan leather over the real (dead) thing, and we can choose to live in harmony with wild animals instead of exterminating them.