Progress! New York’s Puppy Mill Pipeline Bill has been signed into law by Gov. Kathy Hochul, and countless cats, dogs, and rabbits won’t be bred and sold at pet stores as a result. This bill will also greatly reduce the importation of animals from out-of-state breeding facilities, where they’re typically kept in inhumane conditions and denied socialization, exercise, and even basic veterinary care.

“Dogs, cats, and rabbits across New York deserve loving homes and humane treatment. I’m proud to sign this legislation, which will make meaningful steps to cut down on harsh treatment and protect the welfare of animals across the state.”

The passage of the Puppy Mill Pipeline Bill is great progress for animals in New York, but breeders will continue to sell puppies, kittens, and other animals in other states so long as people are buying them.

Why Is the Puppy Mill Pipeline Bill Banning the Sale of Animals in New York?

Most pet stores that sell puppies obtain them from puppy factory farms, hellish mass-breeding facilities in which dogs are typically forced to live in cramped, squalid conditions with minimal veterinary care and human interaction. “Purebred” and “designer” dogs (including breathing-impaired breeds, such as French bulldogs, pugs, and Boston terriers) often endure lifelong disabilities and ailments and die prematurely because humans have bred them for grotesquely distorted features. 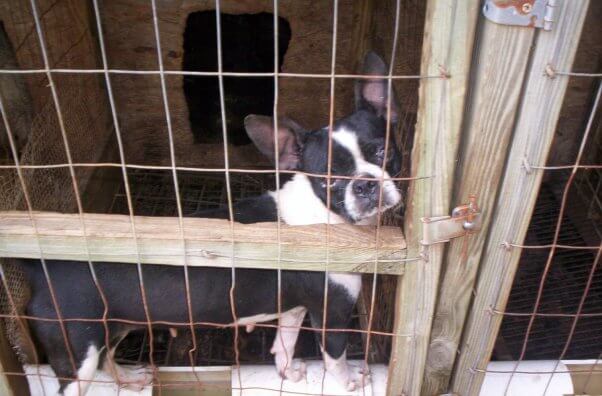 Don’t throw money at the dog-breeding industry, which clearly doesn’t care about animals’ well-being. All purebreds (flat-faced or not) suffer from congenital, often painful conditions.

The solution to limiting the suffering of dogs and other animals who are bought and sold is simple: Stop breeding and buying them. Instead, adopt from a reputable shelter if you’re ready for the lifetime commitment of being an animal’s guardian. You’ll help reduce the companion animal overpopulation crisis and make room for another animal to have a chance at adoption.

Pledge to Adopt From a Reputable Shelter