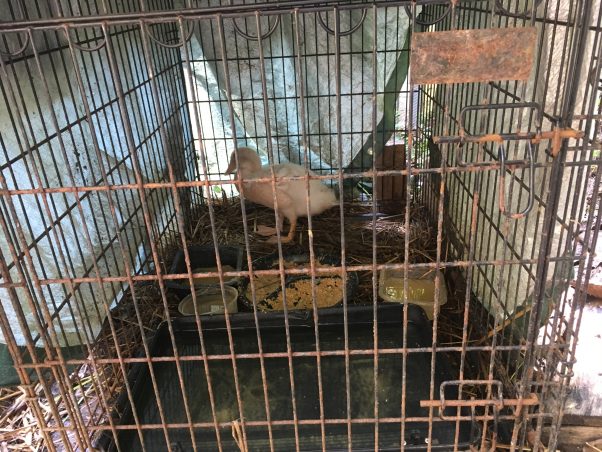 PETA fieldworkers accidentally discovered a young duck, whom they named Herman, while visiting a rural Virginia home to check up on the “backyard dogs” who live there. Herman was living in what can only be described as “duck hell”: a dank, rusty wire crate covered with a tarp, caked with his own waste and rotting food, and teeming with flies and maggots.

The fieldworkers had a heart-to-heart with Herman’s owners, informing them that the young bird needed not only more space and water to swim in but also the companionship of other ducks.

Herman’s owners allowed PETA to take him to what can only be described as “duck heaven”: a spacious vegetarian farm, complete with a pond and lots of feathered “future friends.”

Herman took to his new digs like, well, a duck to water. Watch him splash with glee as he takes his very first swim:

Now, Herman gets to swim every day with other ducks, including his best buddy, Silver, and two others rescued by PETA, Harry and Houdini.

Ducks may be cute, but as PETA fieldworkers have found, caring for one can be a commitment of more than 10 years that most people aren’t equipped to handle. Many ducks are purchased on impulse, especially around holidays, then shoved into a cramped cage or pen—often without the avian companionship and water for swimming that they require—or simply abandoned at a nearby lake or pond, where they’re not equipped to fend for themselves and are literally “sitting ducks” for predators.

See ducks as individuals who value their own lives and don’t want to be used in the down, meat, or foie gras industries or exploited in any other way. Anyone who would like to take in ducks should be prepared for the commitment—which can be 10-plus years—of caring for them and always adopt those in need rather than buying them.