If we’re serious about stopping climate change, we need to start by changing what we put on our plates. That’s the message that PETA Germany is bringing to COP23, the United Nations Climate Change Conference, which is taking place in Bonn, Germany, this week.

Kicking things off, PETA Germany held an eye-catching demonstration featuring giant inflatable bulls, an inflatable globe, and messages in multiple languages, such as “U.N.: Saving Our Climate Starts on Our Plates: Go Vegan.” 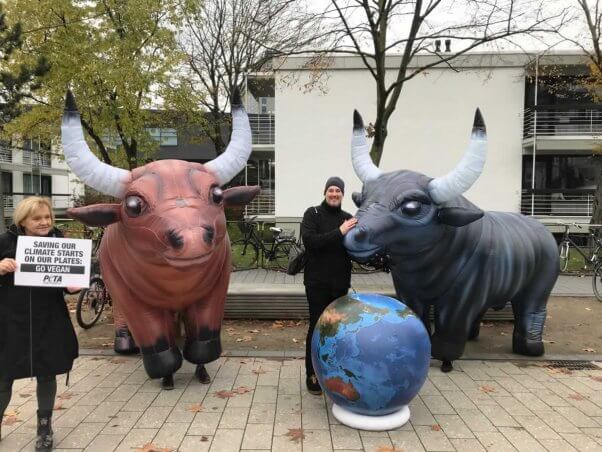 The demo was a hit with attendees. A delegation from the island nation of Fiji, which is threatened by rising waters caused by climate change, stopped by and took photos to share online, and people from New Zealand chatted with PETA Germany reps about the ways in which their country’s dairy industry is affecting the world’s climate. 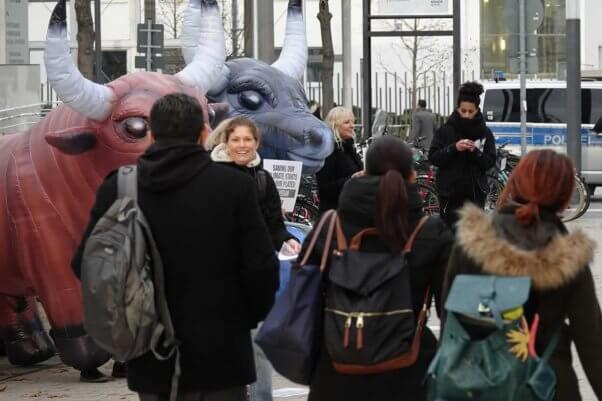 PETA Germany is also co-organizer of a panel event at COP23 called “Reducing Livestock’s Long Shadow—Opportunities to Keep Warming Well Below 2⁰C.” The event will focus on how, in order to meet the goals of the Paris Agreement, the world needs to shift away from eating animals and embrace a vegan lifestyle. Speakers at the event will also talk about the ways in which going vegan is a boon for our health—and a lifesaver for animals.

Even though the U.S. is now the only country in the U.N. that isn’t part of the Paris Agreement, there is some encouraging news: According to a recent report, the number of Americans who identify as vegan has increased by a massive 600 percent in just the last three years. For the sake of the climate, animals, and the whole world, let’s hope this trend continues!

I want to take the vegan pledge!
I want a free vegan starter kit!