As President Barack Obama began a tour of the country to talk about jobs and the economy, PETA met him in Asheville, North Carolina, and presented him with a job description of our own: 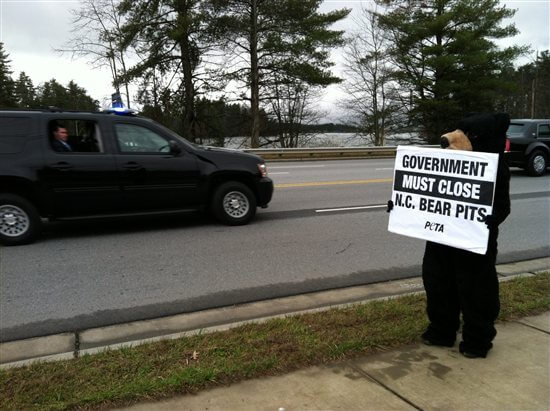 While the president spoke to Asheville residents about lowering the unemployment rate, PETA asked him to grant retirement to the bears who are suffering in another part of the state in squalid roadside bear pits. The U.S. Department of Agriculture (USDA) recently suspended the operating license of one of the pits, the Chief Saunooke Bear Park, after PETA filed multiple complaints about animal abuse there. The USDA cited the bear pit for, among other abuse, denying the bears adequate food and veterinary care.

Obviously, the Secret Service took stock of our bear and her message. Here’s hoping the POTUS realizes soon that these bears want to be unemployed, like, now!