Like most people, we love us some Paul McCartney at The PETA Files—although my man crush has nothing on the adoration of one blogger who shall remain nameless (but here’s a hint)—and here’s yet another reason why: Between his two sold-out performances at the Frank Erwin Center in Austin, Texas, Paul joined PETA Senior Vice President Dan Mathews to present Mayor Lee Leffingwell with an award recognizing Austin as PETA’s Most Vegan-Friendly City in the U.S.! 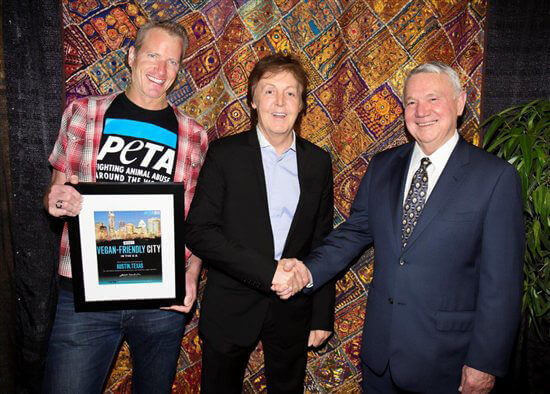 The capital of Texas clinched the title, thanks to the wide variety of vegan meals, snacks, and desserts served in its cafés, co-ops, dairy-free ice cream shops, music venues, and more. While many restaurants around town—such as Mother’s Cafe & Garden, Counter Culture, and Bouldin Creek Cafe—serve up delicious vegan food, it’s in the food truck division that Austin really pulls ahead of the competition: The Vegan Yacht, The Vegan Nom, Arlo’s, and Capital City Bakery are all completely vegan, and many other trucks—including East Side King, Biscuits and Groovy, and The Flying Carpet—have delicious vegan choices on their menus.

As Paul pointed out, “The influx of forward-thinking musicians and techies, the thriving university, and the food trucks all over the city run by young veg-friendly hipsters have made Austin the absolute cutting-edge place for green eating.”

If you’re planning a trip to Austin (or anywhere else), be sure to check out PETA’s restaurant guide. And if your traveling companions don’t yet understand why vegan delights are the best, let Paul McCartney explain it to them.