It wasn’t as if experimenters at New York University (NYU) didn’t know for days that Hurricane Sandy was approaching. It wasn’t as if they didn’t know that federal policy requires them to at least try to protect the animals they torment and kill in experiments from also becoming victims of a natural disaster. But the experimenters either made no evacuation plan for the animals in their “care” or they failed to follow through with it. Instead, they abandoned 10,000 mice and rats in a basement laboratory, who remained trapped in their cages as the floodwaters rose. Many animals—panicked, afraid, and desperate to escape—drowned to death, while others suffocated from the toxic diesel fumes of a leaking fuel tank. NYU was unable to give an exact figure for the number of animals who died—remarking instead that the facility lost 7,660 cages of mice and 22 cages of rats, with each cage holding one to seven animals. 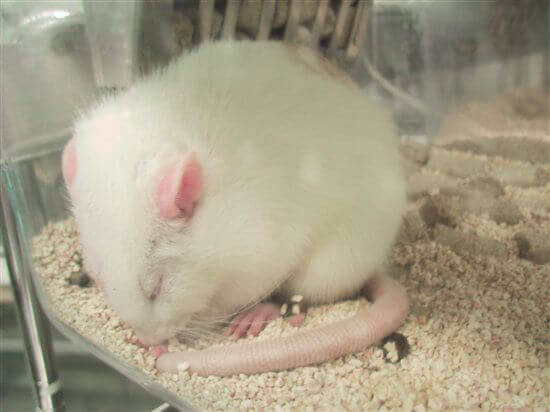 PETA has filed a complaint with the National Institutes of Health, the government body that oversees federally funded experiments, calling for an investigation into NYU’s irresponsible and unconscionable actions and inaction. In our complaint, we pointed out that the university will likely acquire thousands more animals to replace those who died, multiplying the suffering caused by the experimenter’s negligence.

It’s not the first time that animals were left trapped in laboratory cages during natural disasters. At the University of Texas Medical School at Houston, 35 dogs, 78 monkeys, 300 rabbits, and 4,000 mice and rats drowned during tropical storm Allison in 2001. The storm also killed 30,000 mice and rats who were left in the basement at Baylor College of Medicine. Hurricane Katrina killed 8,000 animals trapped in Louisiana State University’s laboratories, and thousands more died at Tulane.

An official with the National Academy of Sciences remarked: “This happens again and again and (research labs) never learn. Anybody with half a brain knows you do a site-specific analysis [to understand the risk of disasters], and it’s really stupid to put your animals in the basement if you’re in a flood zone.”