Stop the presses! After a PETA undercover investigation of a Licking County, Ohio, egg factory farm operated by Trillium Farm Holdings revealed severe, widespread abuse of hens, PETA is putting Douglas E. Sassen, city of Newark director of law, on blast. Our full-page ad in the local paper, the Newark Advocate, calls on Sassen to authorize Licking County’s humane officer to conduct a criminal investigation into Trillium — and to file any appropriate cruelty-to-animals charges. Check out the ad below: 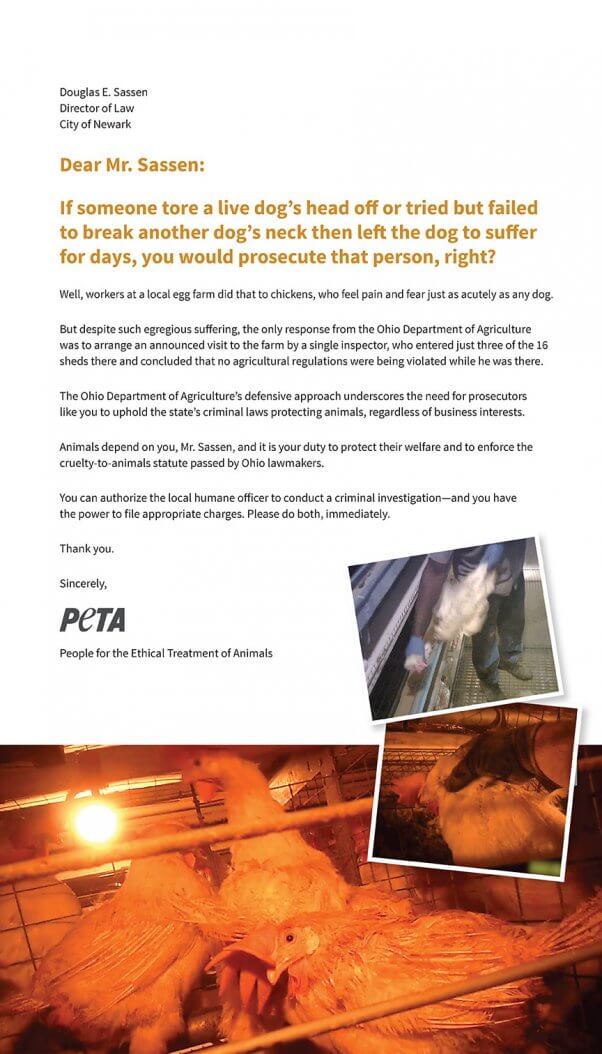 Birds Are Suffering at Trillium Farms

In one incident at Trillium, PETA’s undercover investigator found a severely injured hen still alive in a trash bin. A supervisor had clumsily attempted—but failed—to kill the bird and then let her languish for two more days before another worker finally killed her. One worker was seen pulling a live hen’s head off. In just 18 days at Trillium, PETA’s investigator found hundreds of dead hens, many of whom were left to decompose alongside the survivors in small, cramped cages.

Even when presented with proof of this egregious suffering, the only response from the Ohio Department of Agriculture (ODA) was a pre-announced inspection of Trillium, which took place after giving the facility’s staff 11 days to clean the waste-encrusted cages and filthy sheds. On the day of the inspection, a single ODA inspector was tasked with assessing the roughly 1.8 million hens at Trillium. The inspector walked through just three of the 16 sheds before concluding that no agricultural regulations were being violated.

A thorough, proper, criminal investigation into Trillium needs to take place. That’s exactly why we’re calling on Sassen to act.

Read All About It: PETA Takes On Trillium Cruelty

Fight Speciesism: Show Chickens That You Give a Cluck

If the abuse that these chickens endured had been inflicted on puppies, people everywhere would be outraged. That’s why we must always remember that chickens feel pain and experience fear just as acutely as dogs do. It’s unacceptable to treat any animal like property or an object—we must always consider that animals have their own agency, interests, lives, and purposes. They aren’t alive to serve as our toys or our breakfast. 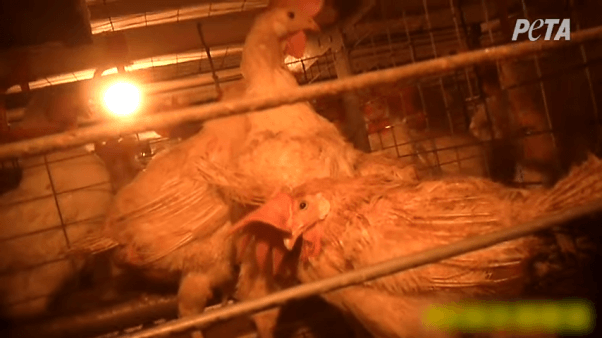 The best thing that you can do for hens is to refuse to buy their eggs and flesh. With so many delicious, healthy vegan options readily available, it’s never been easier to leave animal-derived foods off your plate.

Want to do more to help birds at Trillium?

America’s largest grocer, Walmart, puts its brand name on eggs sourced from the abused, miserable hens at Trillium. Join tens of thousands of compassionate people who have asked Walmart to take immediate and decisive action by reconsidering its ties with Trillium today: