If someone left an injured dog in a garbage bin to suffer for days, they’d be prosecuted.

When it comes to experiencing fear, loneliness, and feeling pain, a dog is no different from a human or a hen. So why have Ohio officials failed to prosecute Licking County–based Trillium Farm Holdings?

On September 21, PETA ran a full-page advertisement in the print edition of The Newark Advocate calling on kind people to help some 2 million hens suffering at Trillium by refusing to buy eggs. 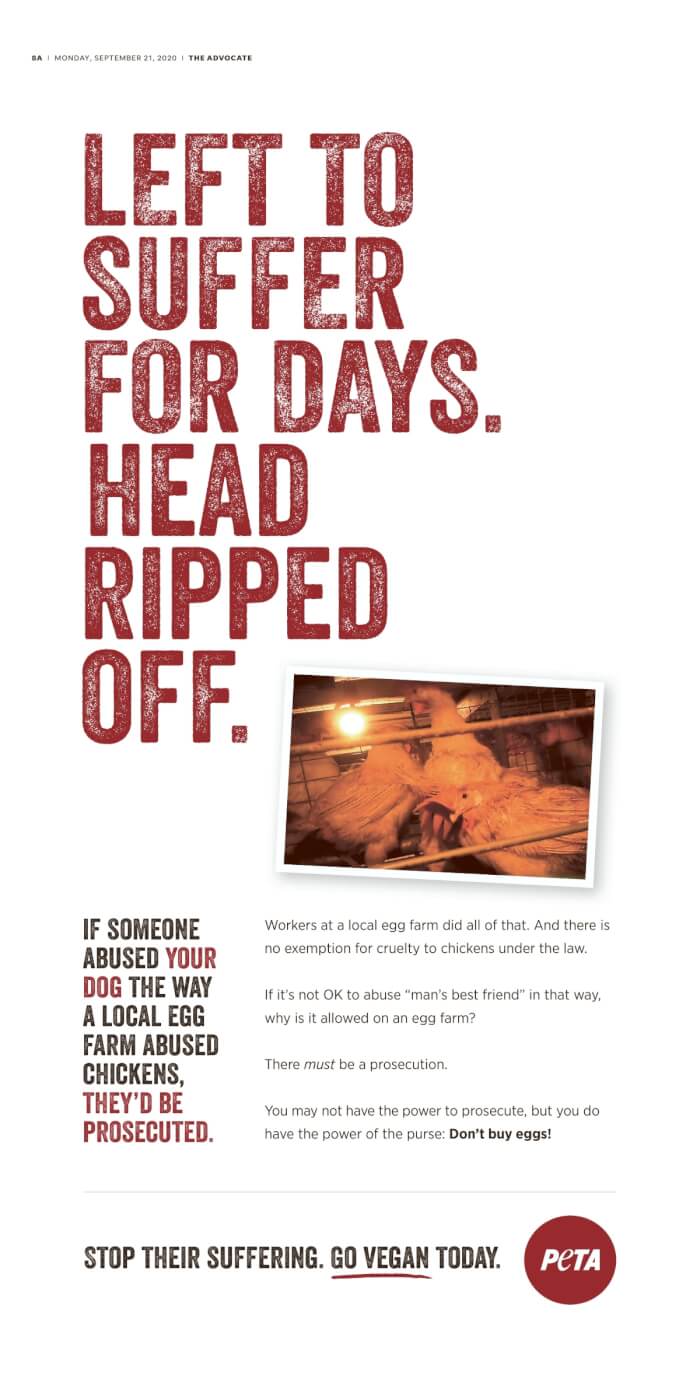 The ad highlights the need for a prosecution in order to abate cruelty to hens at Trillium, where a PETA undercover investigation revealed widespread, severe abuse. In one incident, the investigator found a severely injured bird still alive in a trash bin. A supervisor had clumsily attempted but failed to kill the hen and then let her languish for two days before another worker finally killed her.

Read more below about the horrific findings at Trillium and what you can do as an activist to end workers’ blatant abuse of hens:

Ohio won’t help nearly 2 million suffering birds at Trillium Farm Holdings, so it’s up to people like you!

A new mobile PETA billboard calls on kind humans to help hens imprisoned at Trillium Farm Holdings in Licking County after the Ohio Department of Agriculture (ODA) purportedly turned up no violations of law. 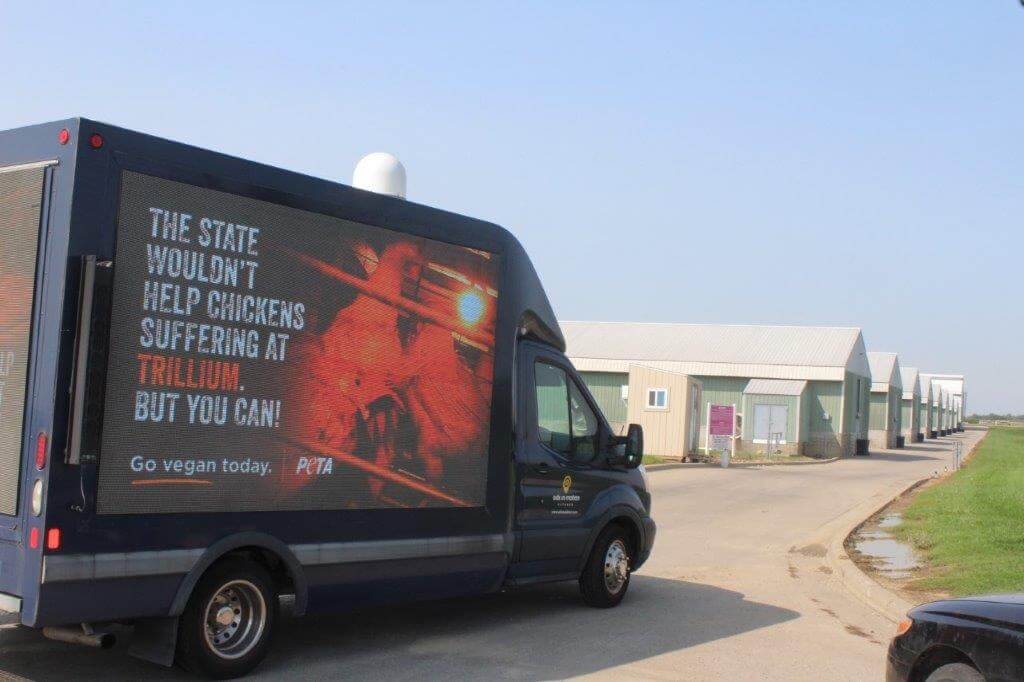 The billboard will be driven past the Hartford Township, Ohio, farm and—because the farm’s eggs are sold widely under Walmart’s “Great Value” brand—a local Walmart store to convey the message that buying eggs kills.

Authorities informed Trillium of the inspection before visiting one of its sites.

The ODA’s visit came just a day after a PETA undercover investigation revealed widespread, severe abuse of laying hens there. Workers repeatedly pulled on and twisted the birds’ heads in failed attempts to break their necks.

Farm staff worked to clean the sheds for almost two weeks ahead of ODA officials’ announced July 16 inspection of the site. An inspector visited only three of the 16 sheds, which hold 1.8 million hens, and concluded, “No violations found.”

Chickens are caring mothers—a hen will “talk” to her chicks in the shell before they’ve hatched in order to teach them to recognize her voice in a flock. They have likes, dislikes, and needs that make their lives just as interesting as ours.

However, at Trillium, their existence is reduced to squalor and constant misery so that the farm can profit from their eggs.

Workers left many hens to decompose alongside the survivors inside small, cramped cages. In one incident documented on video, PETA’s investigator found a severely injured hen still alive in a trash bin. A supervisor had clumsily attempted but failed to kill the bird and then had let her languish for two more days before another worker finally killed her.

Birds had no place to stand, sit, or lie down except on the bare wire flooring of the cages. Many of them were missing feathers, often the result of stress-induced self-mutilation or fighting, as each one had less than a square foot of space.

A deafeningly loud leaf blower was used to remove loose feathers and dust, causing the trapped birds to panic and crash against the wire walls of the cages.

Imagine being roasted alive or gassed on this nightmare farm.

PETA’s investigation into the farm followed verified reports by a whistleblower that 260,000 hens had been killed in December by closing off the ventilation in sheds and raising the temperature to at least 104 degrees, essentially roasting them alive.

In late June, workers violently killed more than 100,000 unwanted “spent” hens, yanking them from their cages and stuffing and slamming them by the dozens into metal boxes, in which they were smothered and crudely gassed with carbon dioxide, an extremely painful process.

Hens Need You to Help Stop This!

PETA is calling on you to take action for hens used for their eggs by going vegan. With so many delicious, healthy vegan options, it’s never been easier to leave animal-derived foods off your plate.

In addition, demand that Walmart take immediate, decisive action to spare these animals even one more day of agony just to prop up the billion-dollar company’s bottom line.

Urge Walmart to Reconsider Its Ties With Trillium Immediately