Naked behind a banner that read, “1 Gal. of Milk Equals 51 Days of Showers,” two PETA beauties showered together outside the California State Capitol today to tell Gov. Jerry Brown that if he’s going to take real action on the drought, he needs to reduce California’s meat and dairy production immediately. 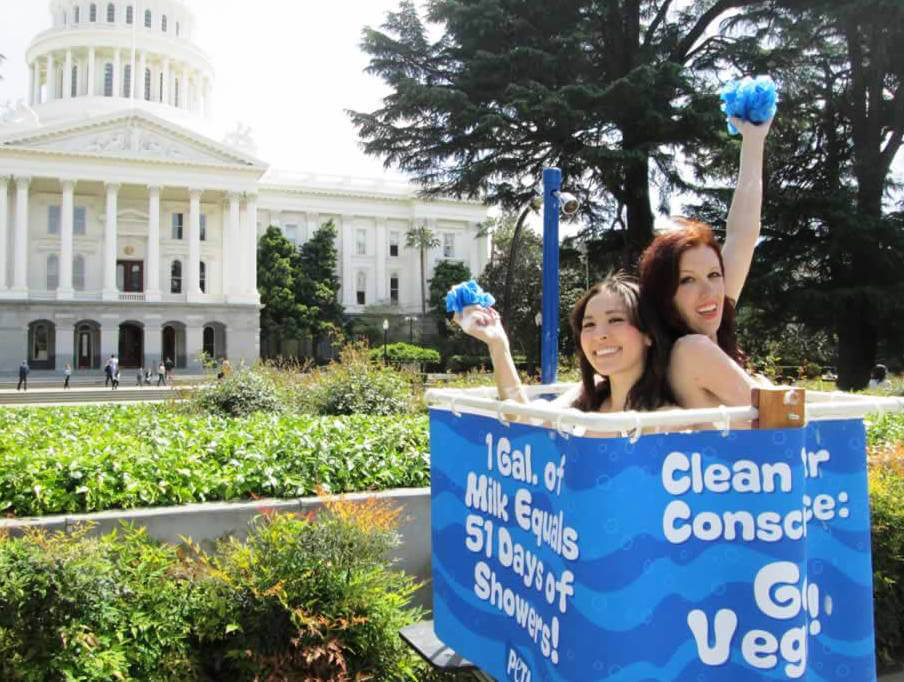 The demonstration followed a letter that PETA sent to the governor pointing out that his recent order for a mandatory 25 percent reduction in water use in urban areas excludes two of California’s largest offenders. The letter urged him to reduce California’s meat and dairy production by at least 25 percent and impose a ban on animal products in state institutions.

As we explained to the governor:

Burdening California families and issuing fines to local water suppliers while continuing to sustain and subsidize a large animal-agriculture sector suggests that these industries, which are largely to blame for depleting California’s dwindling water supply, are exempt from water conservation efforts. It’s irresponsible to restrict water to local homes, businesses, and schools while allowing its free flow to the water-intensive production chains of the meat and dairy industries.

The facts are alarming. In 2014, cows on dairy farms in California required a whopping 4.79 trillion gallons of water. That’s enough for all California residents to continue their normal outdoor water use for three and a half years. Just two slices of cheese require 55 gallons of water to produce, and the production of a single pound of beef requires more than 1,500 gallons of precious water.

Cracking down on the water-wasting meat and dairy industries would have a much greater long-term impact on water conservation than asking people to drive dirty cars and let their grass die.