Last September, PETA filed a lawsuit asking the U.S. federal court in San Francisco to declare Naruto—a then–6-year-old male, free-living crested macaque who is part of a group in Indonesia—the author and owner of the internationally famous monkey selfie photographs that he took himself a few years ago. 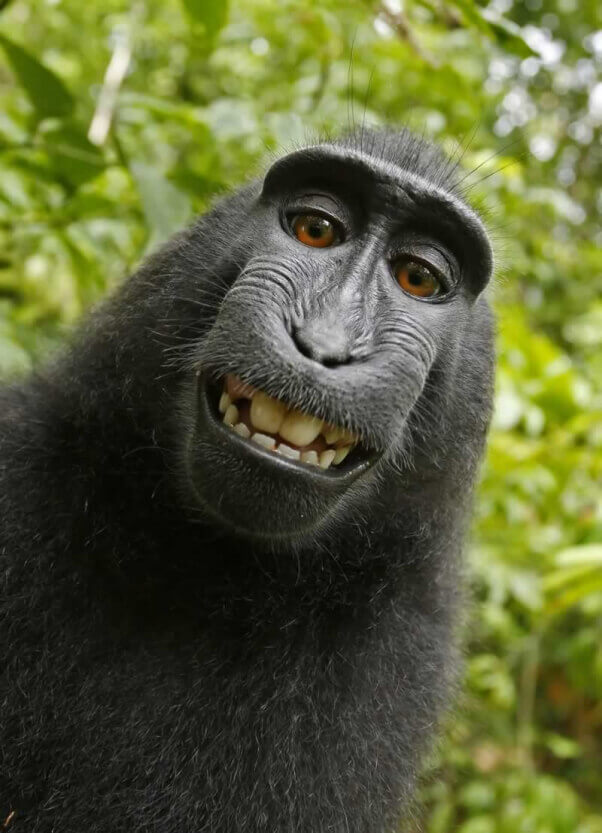 In a disappointing move on Wednesday, the judge indicated that he is inclined to dismiss the case but will give PETA 20 days to file an amended complaint. The judge has doubts about whether the U.S. Copyright Act provides nonhuman animals with standing to own a copyright. Without that express authorization, he feels that he does not have the power to do so himself.

PETA’s attorney, David Schwarz, argued brilliantly. He addressed the court regarding the elasticity of the Copyright Act and said that it doesn’t define “author” and that the matter is fully in the court’s hands to interpret and fill in the gaps in the act because Congress could not possibly anticipate every possible copyright claim or claimant. The judge was complimentary of our brief but believes that he needs an express congressional provision of standing for an animal to hold a copyright.

“Despite this setback, we are celebrating that legal history was made in our unprecedented argument to a federal court that Naruto, a crested macaque monkey, should be the owner of property (specifically, the copyright to the famous ‘monkey selfie’ photos that he undeniably took), rather than a mere piece of property himself,” says general counsel to PETA Jeff Kerr, who is part of the legal team representing Naruto. “We will continue to fight for Naruto and his fellow macaques, who are in grave danger of being killed for bush meat or for foraging for food in a nearby village while their habitat disappears because of human encroachment. This case is a vital step toward fundamental rights for nonhuman animals for their own sake, not in relation to how they can be exploited by humans. As my legal mentor used to say, ‘In social-cause cases, historically, you lose, you lose, you lose, and then you win.’ PETA is working hard for that day to come when nonhuman animals’ basic rights are recognized.”

We are at a point in history—when so much is known about who animals are, not what—when we have the moral imperative to continue the evolution of the law that has proved so vital to the progress and betterment of our society. All animals deserve basic legal rights that reflect their complex traits and needs.

Keep watching for updates to this potentially precedent-setting case.