After China Southern Airlines reneged on its promise to stop shipping primates from China to laboratories in the U.S., dozens of local activists and PETA supporters gathered outside the airline’s Los Angeles headquarters to pressure the company to do the right thing and reinstate the ban. 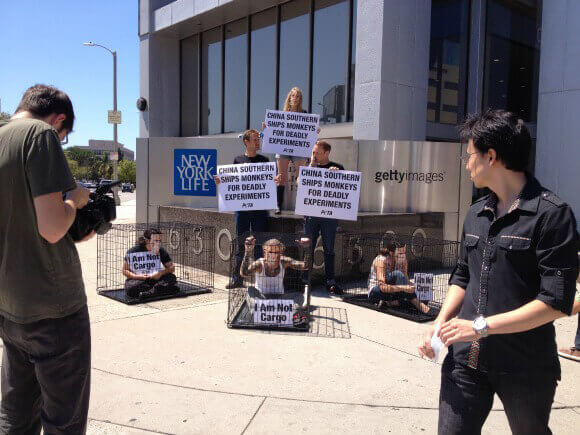 Every year, more than 10,000 primates are imported into the U.S. to be experimented on in laboratories, and most of them originate from China. The traumatized monkeys are crammed into small crates and loaded into the dark, terrifying cargo holds, sometimes on passenger flights just below the feet of unsuspecting flyers. Once they arrive, the monkeys may be injected with experimental chemicals or hit and choked before being force-fed chemicals, as documented during a PETA undercover investigation.

Urge officials at China Southern Airlines to join every other major airline in China by refusing to ship primates to laboratories, and let them know that you won’t fly with their airline until they do so.