Just two months after telling Ellen DeGeneres, “I want to be a vegan,” Meredith Vieira has done it. After seeing her Ellen appearance, PETA rushed Meredith a copy of Sir Paul McCartney’s slaughterhouse exposé Glass Walls, a vegetarian/vegan starter kit, and Tal Ronnen’s The Conscious Cook to help her along. On The Chew, she told chef Mario Batali about why she made the switch: “I’ve done a lot of stories on the way food is, you know, processed in this country—animals—and it’s very disturbing.”

CNBC’s Jim Cramer isn’t just mad about money—now he’s gone mad for vegetarian cuisine. In the wake of the “pink slime” debacle, Cramer announced on Squawk on the Street that he is going vegetarian, just like his doctor and his daughter.

There will soon be less to see of Seattle Seahawk Deuce Lutui. He went vegan to lose weight and improve his performance in the coming season.

Sexiest Vegetarian alum Leona Lewis finds the song formerly called “Theraflu” by the tool currently called “Kanye West” “awful.” She tweeted, “Heard that awful Kanye W song talking about minx dragging on the floor. What an awful thing to be proud of! I take all my love for him back!” She then tweeted a picture of an adorable mink and the words “Lil minx <3.”

Leona’s celeb pals joined her in sticking up for animals on Twitter this week: 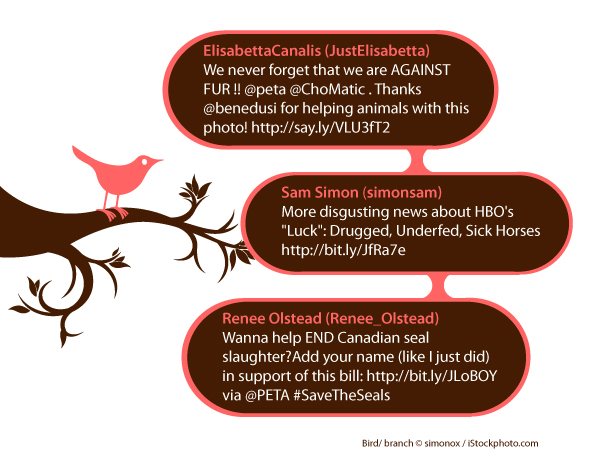 After learning about Walter, a severely abused dog who was starved and then thrown out of the window of a moving car, Ashley Judd is picking up the tab for his medical expenses, visiting him every day, and updating her Twitter followers on his condition. “This never should have happened to Walter, and through his story, we can make sure that it never happens to another animal again,” she said.

Rock legend Morrissey wants to help make sure that no more sheep are mutilated in a cruel process called “mulesing.” While touring in Japan, Moz reached out to Tokyo-based international clothier Uniqlo and asked the company to stop sourcing wool from Australian farmers who still mules sheep.