Los Angeles has been on a roll lately (ever since PETA’s new Bob Barker Building opened there—coincidence?). First, the city banned pet stores from selling puppies, kittens, and rabbits from breeders, and then it became the first major city to embrace and endorse Meatless Monday. Now, the City of Angels is considering a ban on cruel elephant acts. 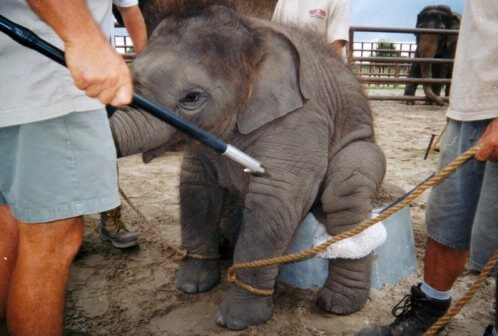 Here’s what’s going on: The City Council’s Personnel and Animal Welfare Committee proposed a measure that would ban circuses and other traveling exhibits in L.A. from forcing elephants to perform.

Ringling Bros. is already blasting the measure with both barrels, so the L.A. City Council needs to hear from every single person who has elephants’ welfare at heart. Please write—even one line—to the council and encourage it to support the ban on cruel elephant acts. Get everyone you know to do the same so that L.A. can continue to serve as a role model for cities across the country.