How many more orcas are going to die at Loro Parque in Tenerife, Spain, before this marine prison is shut down? Yesterday, orca Kohana died at just 20 years old at the park, decades short of her natural life expectancy. She is the third orca to die there in the last 18 months, following Ula, who was just 2 years old, and Skyla, who was 17. 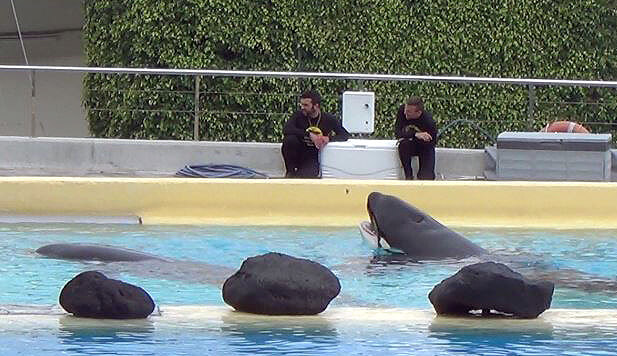 These two orcas, Kohana and Keto, were filmed while locked in a medical tank, which is also used as a holding tank. They attempted to get food or attention from trainers but were completely ignored.

Separated from her family and transported to Loro Parque from SeaWorld Orlando at just 3 years old, Kohana spent years confined to a barren concrete tank and was forced to perform demeaning tricks in exchange for food in order to entertain humans.

While she was alive, two PETA staffers visited Loro Parque and filmed orcas with fractured teeth and other injuries. They floated listlessly in small tanks and appeared to have mucus running from their eyes. Orcas at the park had “rake marks” caused by aggression and attacks from tankmates.

It’s tragic that Kohana was never able to experience the feeling of freedom—and that her only peace came through death. She deserved so much more.

Jet2holidays, a U.K.-based travel company, shamefully continues to profit from the misery of highly intelligent and social animals at Loro Parque. We urge all compassionate travelers to book their vacations through one of the many tour operators that have committed to not selling tickets to this hellhole.