Was your “endless shrimp” processed by slaves? According to a recent Associated Press investigation, there’s a good chance it was. Investigators found that migrant workers in Thailand (including children) were held captive—sometimes for years—and forced to work 16-hour days in shrimp-processing factories with no time off and little or no pay. Shrimp peeled, gutted, and beheaded by slave labor was traced to major supermarkets in the U.S., including Walmart and Whole Foods, as well as restaurants such as Red Lobster. Nearly 90 percent of shrimp consumed in the U.S. is imported, much of it from Thailand and other countries known for human-rights abuses. 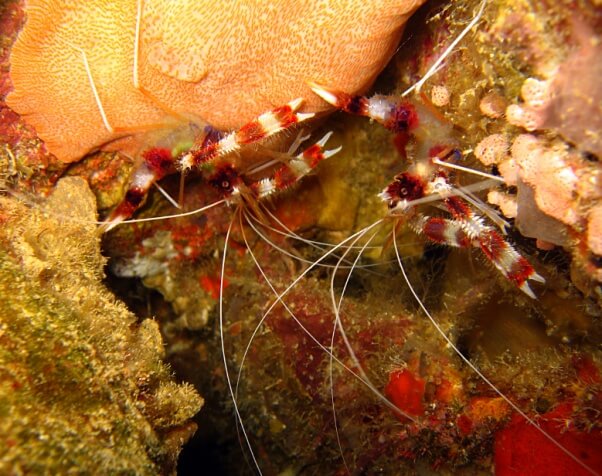 But slave labor is just the tip of the iceberg. The global shrimp industry is also an environmental nightmare. Shrimp boats pull enormous nets behind them that stretch up to 200 feet across, netting not only shrimp but also fish and endangered sea turtles. A barred grate is supposed to keep out the turtles and an opening at the top diverts larger fish, but millions of fish and sea turtles are still caught “by accident” every year. For example, in one North Carolina waterway alone, approximately 200 million small fish are sucked up along with the shrimp every year, posing a threat to the entire ecosystem.

Shrimp farms are just as bad and possibly worse. Asian and South American “shrimp barons” are clearing huge swaths of ecologically sensitive mangrove habitat to create shrimp factory farms, which are commonly cesspools of antibiotics, fertilizers, banned pesticides, contaminated water, and other waste. It’s estimated that one-fifth of mangroves worldwide have been lost since 1980, mostly because they’ve been razed to make way for shrimp farms. Shrimp that comes from cleared mangroves is estimated to have a carbon footprint 10 times higher than beef that comes from cows raised on cleared Amazon rainforest land.

On top of all that, shrimp is not a health food. In addition to the toxins that shrimp absorb from polluted water and contamination with feces during gutting, they’re loaded with cholesterol—just four or five shrimp contain half the recommended daily limit of cholesterol.

If you care about abused workers, the environment, sea turtles, and the shrimp themselves, now is the time to stop eating shrimp and try faux shrimp and other vegan foods instead.