On every visit to the Theater of the Sea in Islamorada, Florida, a visitor noticed something strange: One dolphin, named Sherman, was always by himself, isolated from the other dolphins. He reportedly appeared to differ from the dolphins in another way, too: He seemed to be the only dolphin who was forced to perform in multiple shows and during boat tours daily. 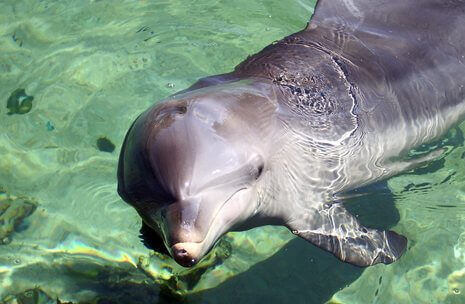 PETA believes that the reported treatment violates Animal Welfare Act requirements that dolphins be “housed in their primary enclosure with at least one compatible animal of the same or biologically related species” and that performing animals be given an adequate rest period between performances, so we’ve filed a complaint with the U.S. Department of Agriculture calling for an investigation.

In the wild, dolphins are highly social and swim up to 100 miles a day in pods. In captivity, they can swim only in endless circles. Living in cramped chlorinated tanks while being forced to perform unnatural tricks is so stressful that many dolphins develop ulcers, exhibit neurotic behavior, and die prematurely.

Never patronize marine-mammal parks or aquariums—your ticket purchase helps pay to keep marine mammals in prison. Also, keep an eye out for the critically acclaimed documentary Blackfish, which may be coming to a theater near you, and take all your friends and family members to see it!